I had been eyeing a loop through Crown King, Cleator, Mayer, and Breezy Pines for a while when I finally decided it was time to take my chances and give it a go. The first time I was planning to do this ride, the road from Crown King to Cleator was closed due to the “Rattlesnake Fire”. I postponed the ride until the middle of September. I invited several friends to go with, one broke his frame the week before the ride, the other backed out last minute. I was off on my own. As you head up Senator Highway, you must remember to turn around and take in the view and admire the rewards of all your hard work. Soon enough I was off the pavement and on to the vast gravel stretches Prescott National Forest has to offer. The climbing continues up the gravel until you hit a cattle guard then its a steep loose decent to Palace Station, about halfway to Crown King. 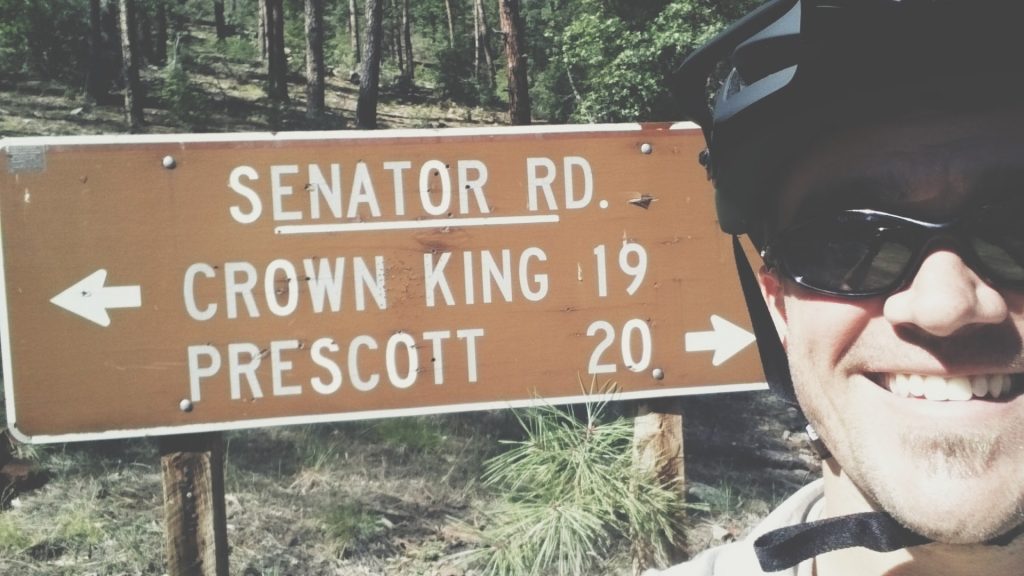 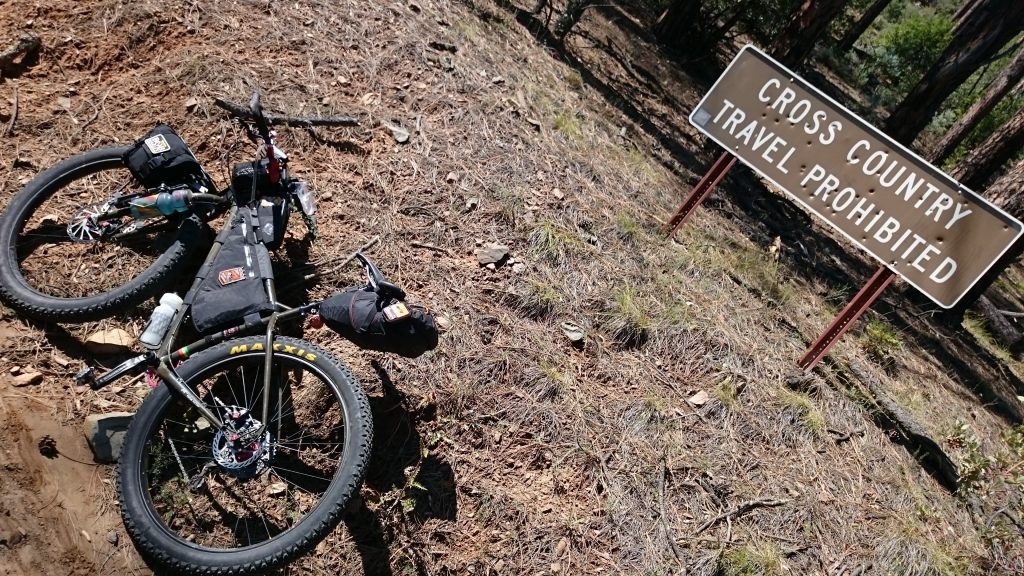 After Palace Station the road winds along beautiful high desert hillsides for miles. The cloud you see here was the first to grow over Prescott that day. In no time, that cloud would be chasing me the rest off the day as it grew bigger. 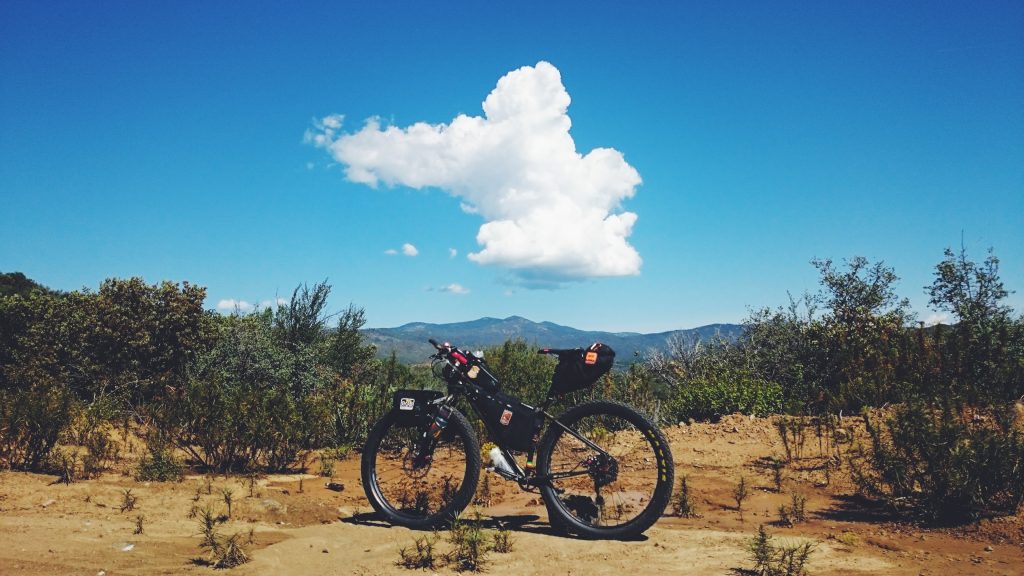 I had to stop to eat a peanut butter and honey sandwich just before Bradshaw City, to fuel me until my real lunch in Crown King. I had a great chicken sandwich at The Mill. As I waited for my food, the clouds grew closer and ever darker. Camping in Crown King was an option, but I chose to cruise down the mountain towards Cleator to see if it was clear to Mayer. 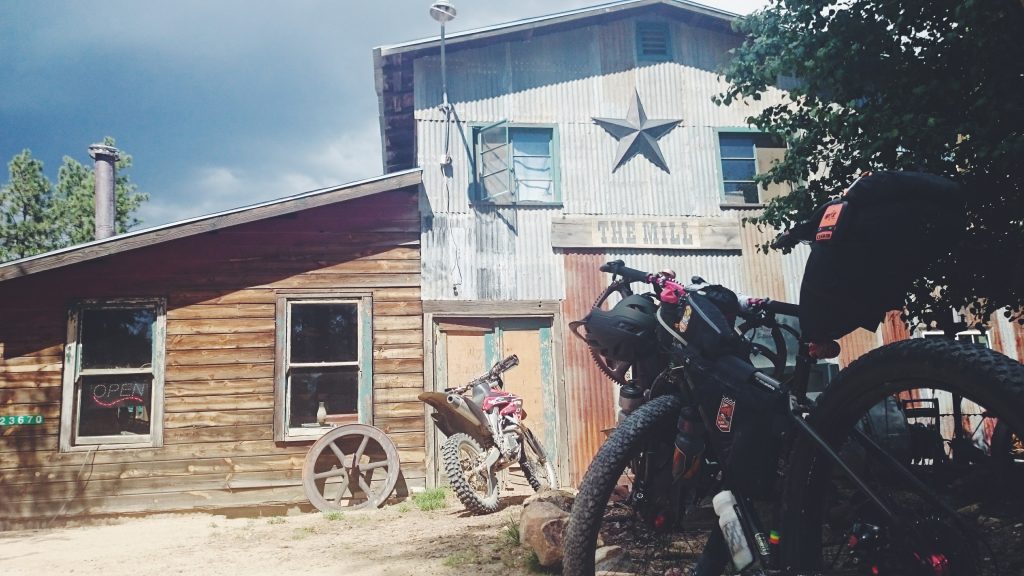 No rain or dark clouds yet, so I kept racing down the hill. 12 miles of high speed winding gravel downhill all the way to Cleator. 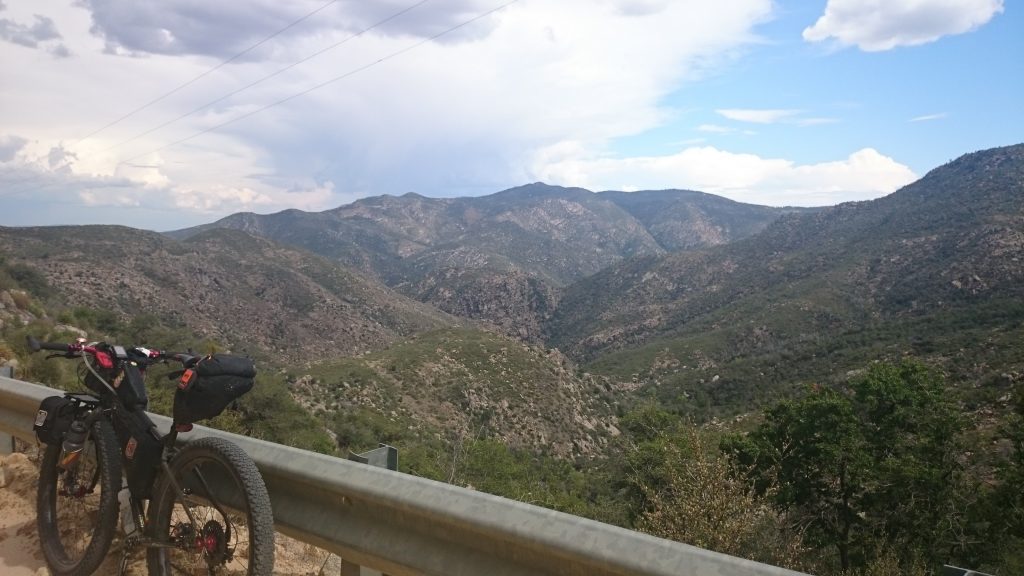 Perfect time for a beer to celebrate the finish of the easiest part of the ride. 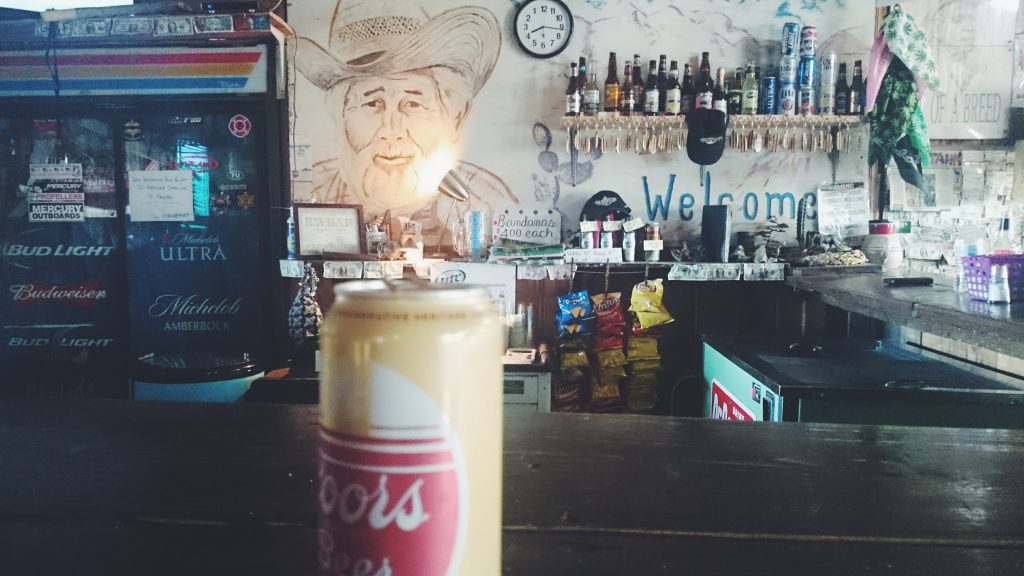 This is the view of the Bar and Yacht Club. I don’t quite know how long this area has been dry, but I am pretty sure it was before Waverunners. 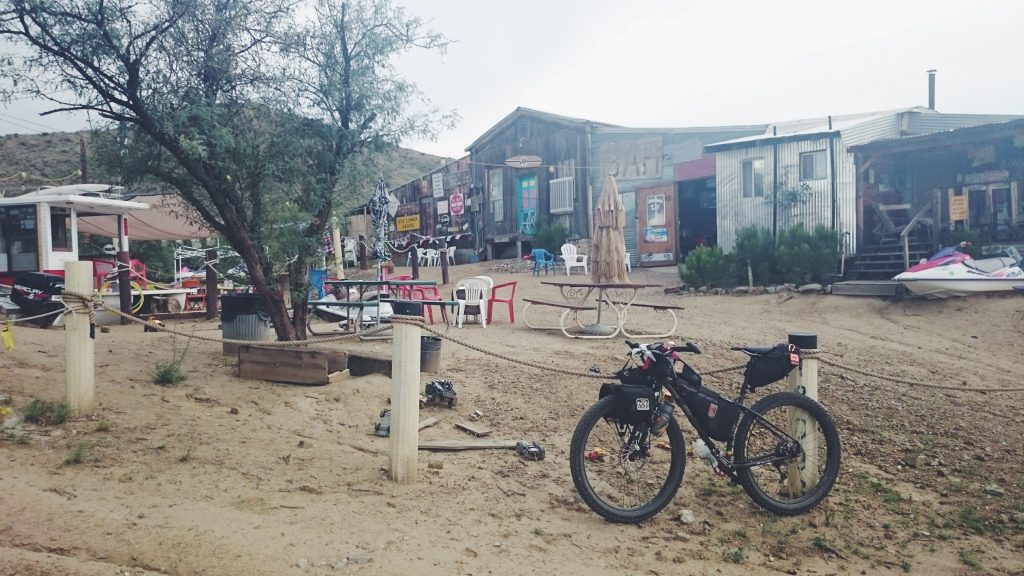 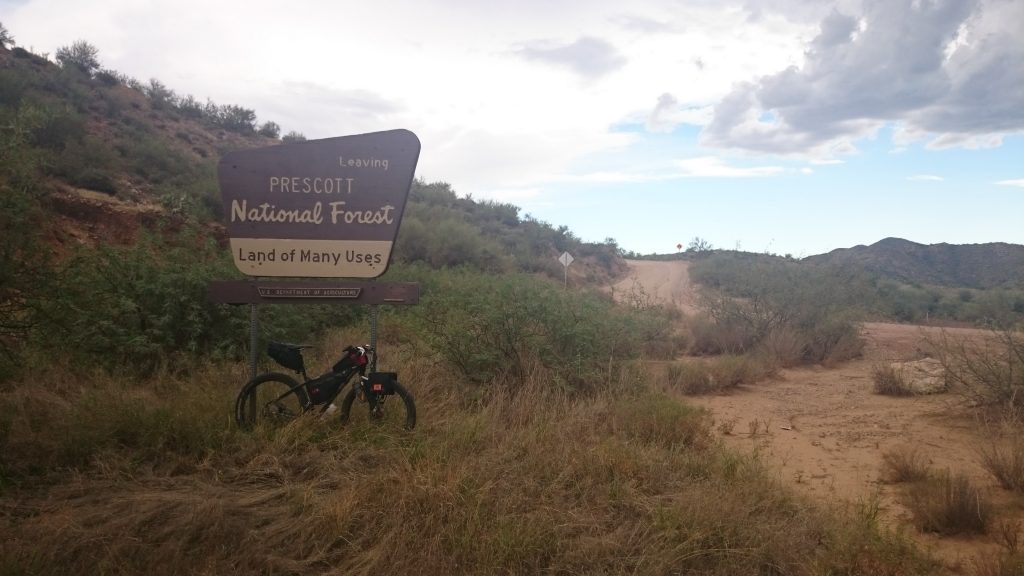 After a short climb out of Crown King, I made it to the Black Canyon Trail. I didn’t bring my gun, these sign decorations were from someone else. 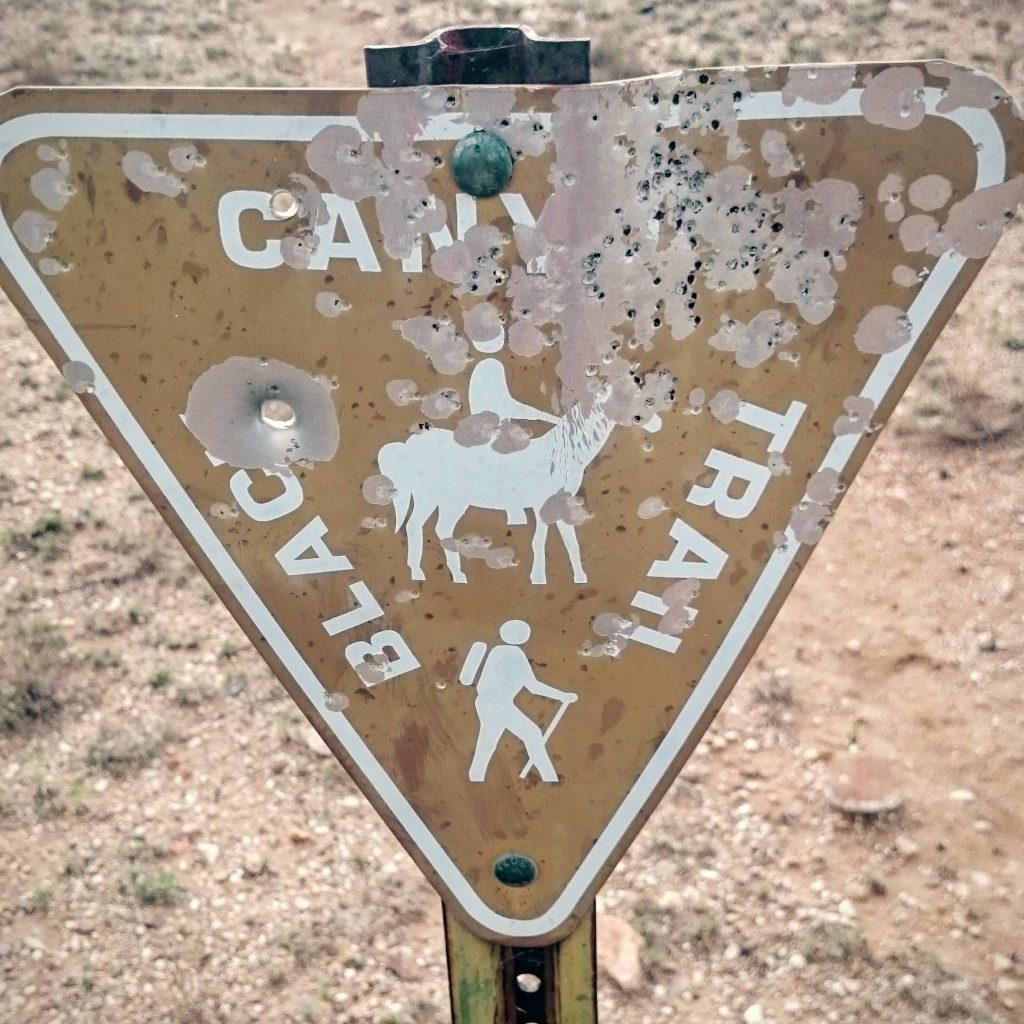 Shortly after, a rattlesnake decided I got a little to close  with the 29+ and told me I should back up a bit. I waited and waited for him to leave, but finally I had to make my way around through the brush and cacti.

After that snake, I had another close call with one sleeping on the trail, but I blew past before it woke up. I found a nice hill top to camp on and enjoy the view of late summer storms rolling over the mountains I was rolling over earlier in the day. Another peanut butter and honey sandwich and some combos, and I was ready for some sleep. 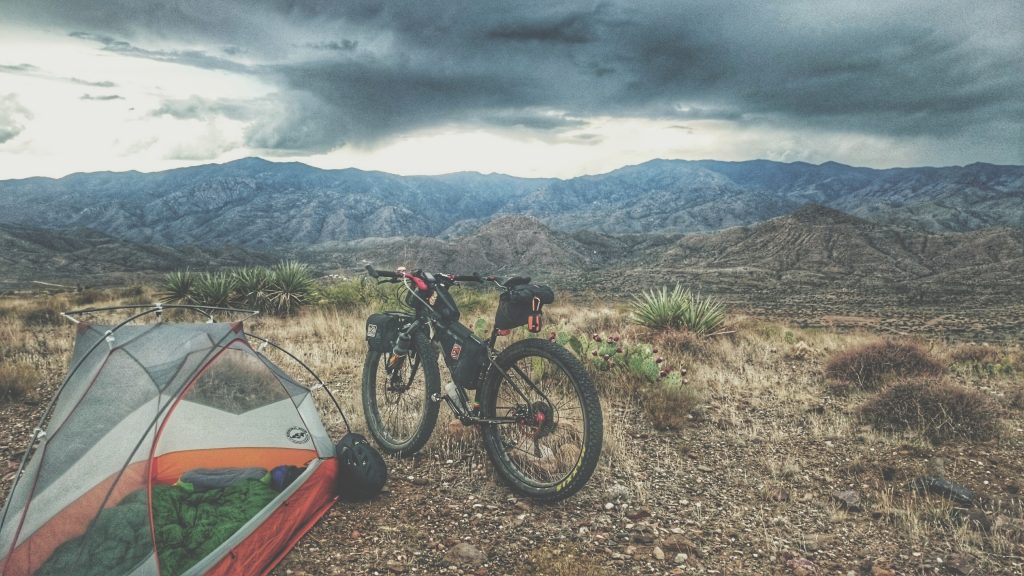 The sunrise was beautiful, and had me up and on the road early. I only had one Clif Bar left and I still had 10 miles to the next refill spot. 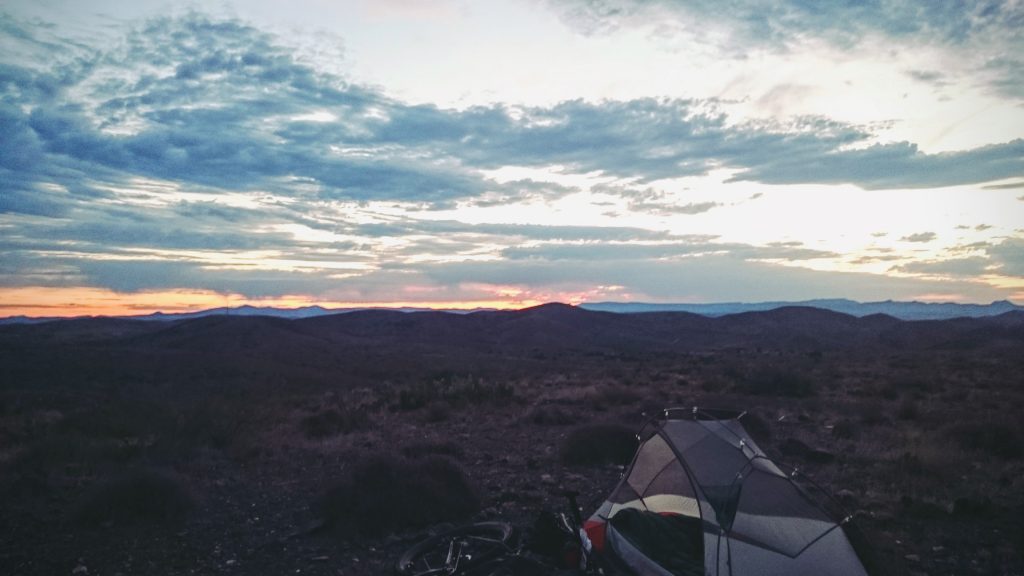 Refuelling with the breakfast of Champions in Mayer. I am glad I grabbed two mufins.

A short stint on 69 led to Poland Road. As the sign says, curvy mountain grades ahead. My favorite. 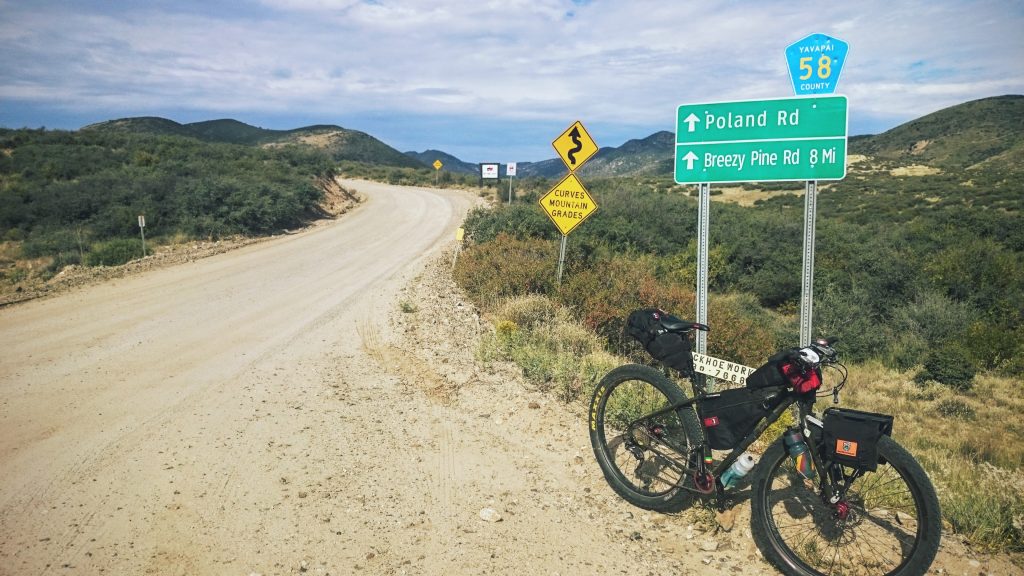 Breakfast settled in and pushed me straight to Breezy Pines. I had already passed my turn off, as the spot where my GPS route was leading me looked like a complete landslide had taken it out years ago. 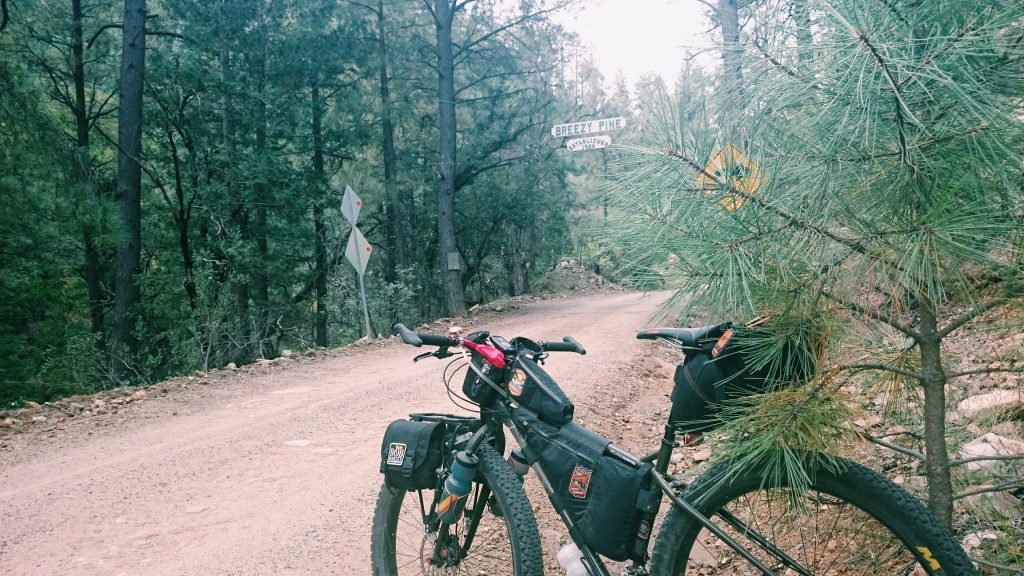 I took the first route I could to meet back up with my plan. In doing so, I found the Poland – Walker tunnel entrance, or what was left of it. 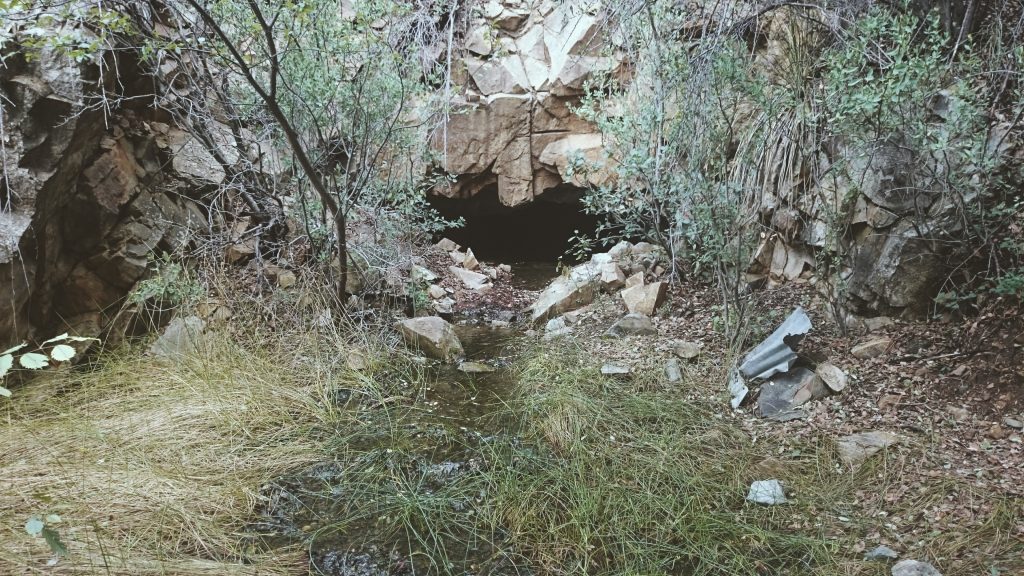 A few turns later, the old route over to Walker got real steep, real quick. No wonder there was a tunnel underneath. The humidity from the rains the night before had me dripping wet as I pushed over the mountain. 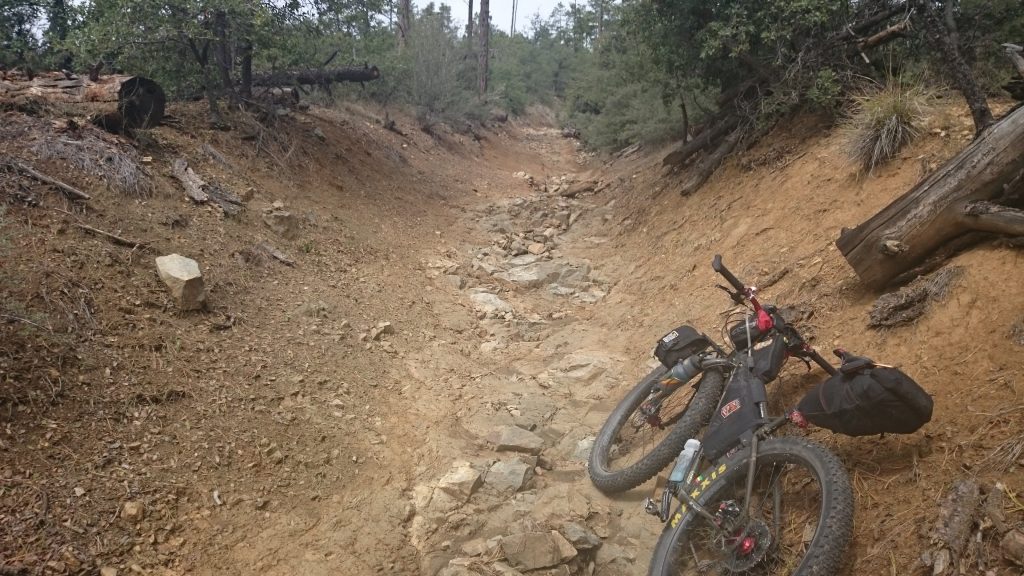 Somehow, I stumbled upon this old USGS marker. 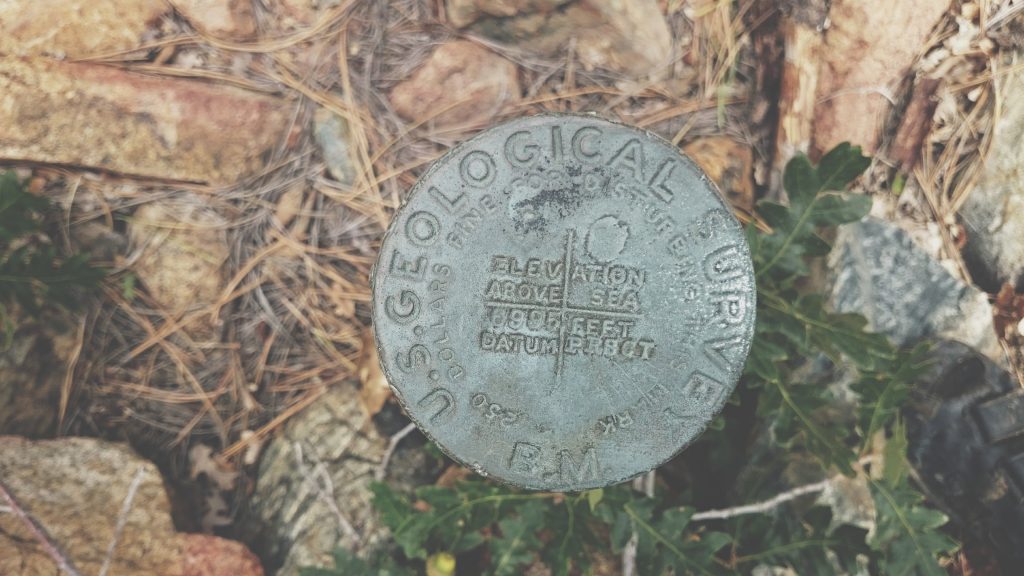 Again, my planned route led straight to a landslide and I had to bushwhack my way down to Big Bug Mesa Road. Thunder was just over the hill  to the west for the next 10 miles. 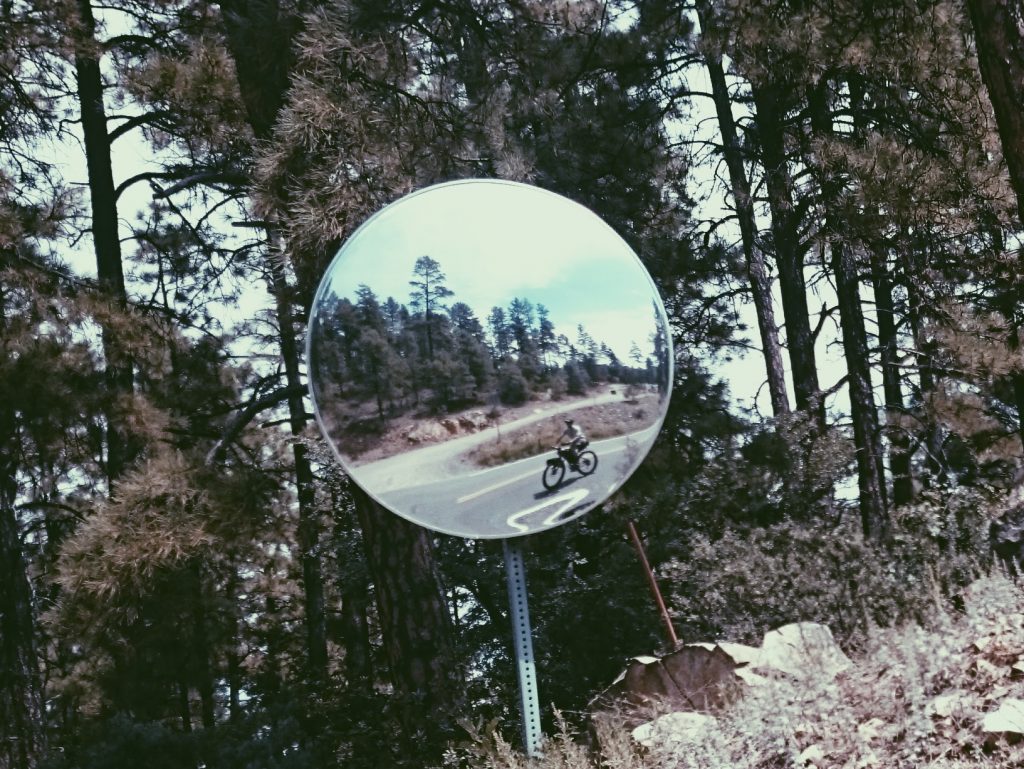 I rode down Walker Road until I got to the top of the 305 trail. I rode most of 305 when I crossed a creek and broke my new 11 speed chain. I assumed I was done and started scooting my bike down the road until it dawned on me I did have a 9 speed quick link with me. I reinstalled the chain and pedaled the rest of the way home, trying to shift gears as little as possible. I stopped at the bike shop to pick up the correct links to fix the click of the wide link passing through the derailleur every few pedal strokes. When I finally made it back to the house, I jumped straight in the shower. When I cam out, the monsoons had made their way to town and were unloading outside the house. I made it home just in time.