Day one started off great, I had way more breakfast than usual, and had lots of energy to start the day. The first 30 miles of trail were brutal. Lots of pushing the bike up hill, or first gear grinding, trying not to brake the tire loose over the rock strewn single track. The temperatures rose quickly, I drank water, or threw a bite of food in my mouth every chance I had, but the terrain was so rough, it wasn’t often enough. 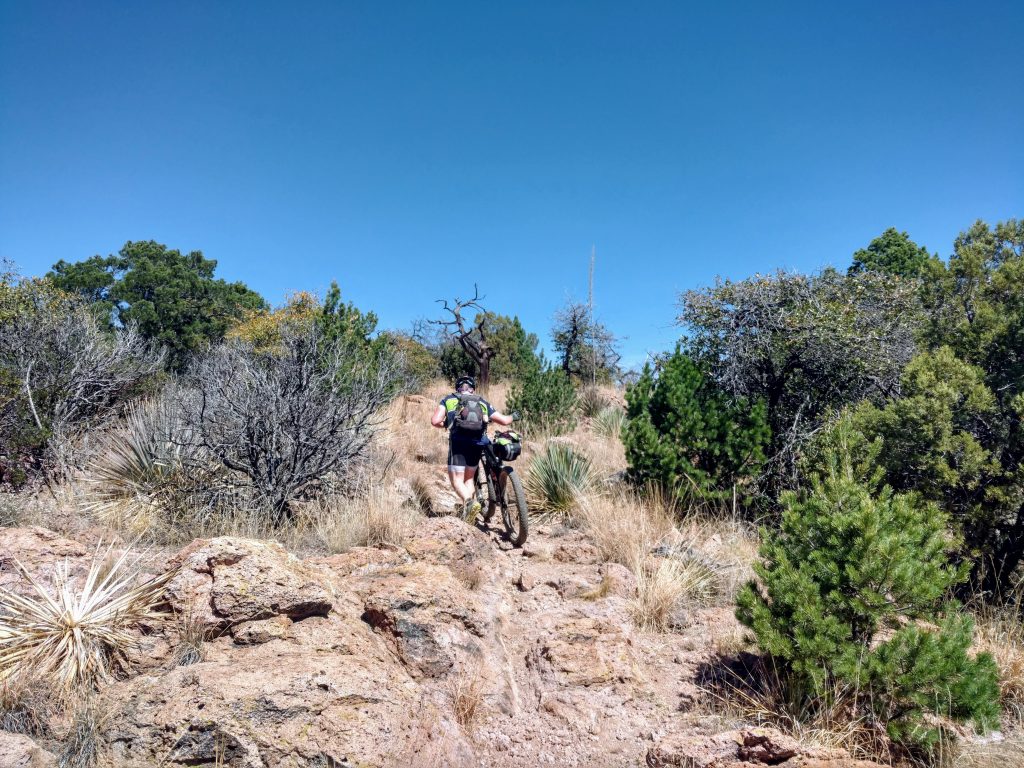 View from the Canelo Hills. 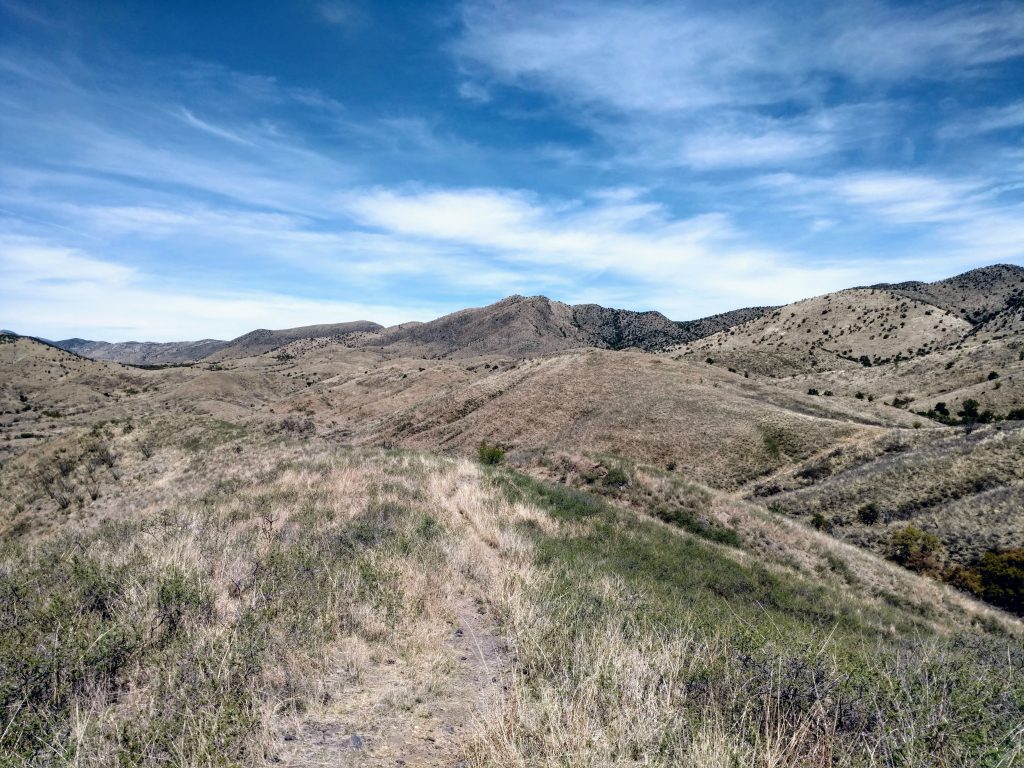 Kaitlyn Boyle just after she passed me. No one escapes the heat. 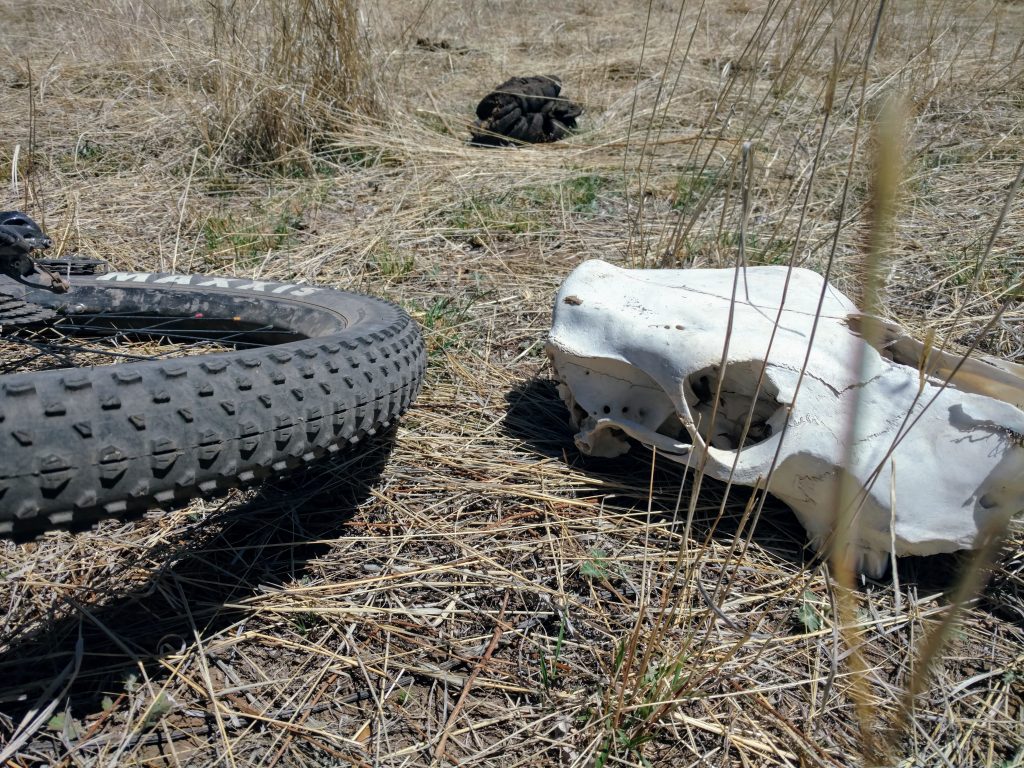 After making it to Sonoita, I drank a Gatorade, refilled water, and ate some more snacks. Another racer gave me a spare sandwich he had purchased. I ate bites of the hoagie and drank as much as I could over the next several miles.

I had to yell at these cows for a while before they’d let me pass.It was like they had in earbuds or something.

Beautiful sunset to end day one. 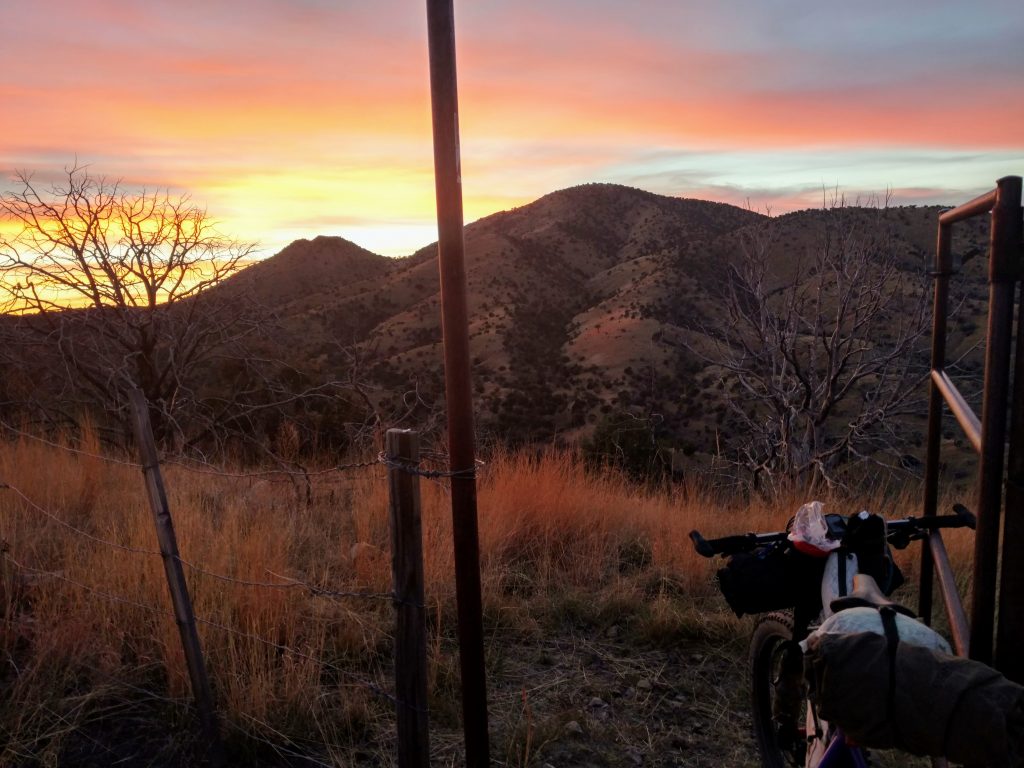 Mike Haas caught up to me a few miles before Kentucky Camp. When we got there, I topped off my water and rolled on, trying to push to Colossal Cave. Somewhere around 8:00 I hit an energy wall and decided, if I was going to push through, I had to eat a meal. I cooked up some Mexican Rice and Chicken. My stomach wouldn’t settle, so I decided to call it a night early and tried to eat and drink as much as possible. Mike and I set up our bivies and we were out in no time..

We woke up before dawn, I didn’t feel bad, but I didn’t have any energy. I drank some more water, ate some cookies, and packed my stuff. As we rolled through the next few miles, I took it very easy on all the climbs to conserve what energy I had left. I stopped to try to stomach a Pro Bar, Mike rolled on. A small bit of energy returned and the next section of single track was the fastest yet. Things were looking up. Ten miles in to the day, I went to take drink from my water bladder, empty. The next 15 miles were a test to see how little effort I could output, so as not to over heat.

Morning of day 2, no shade in sight. 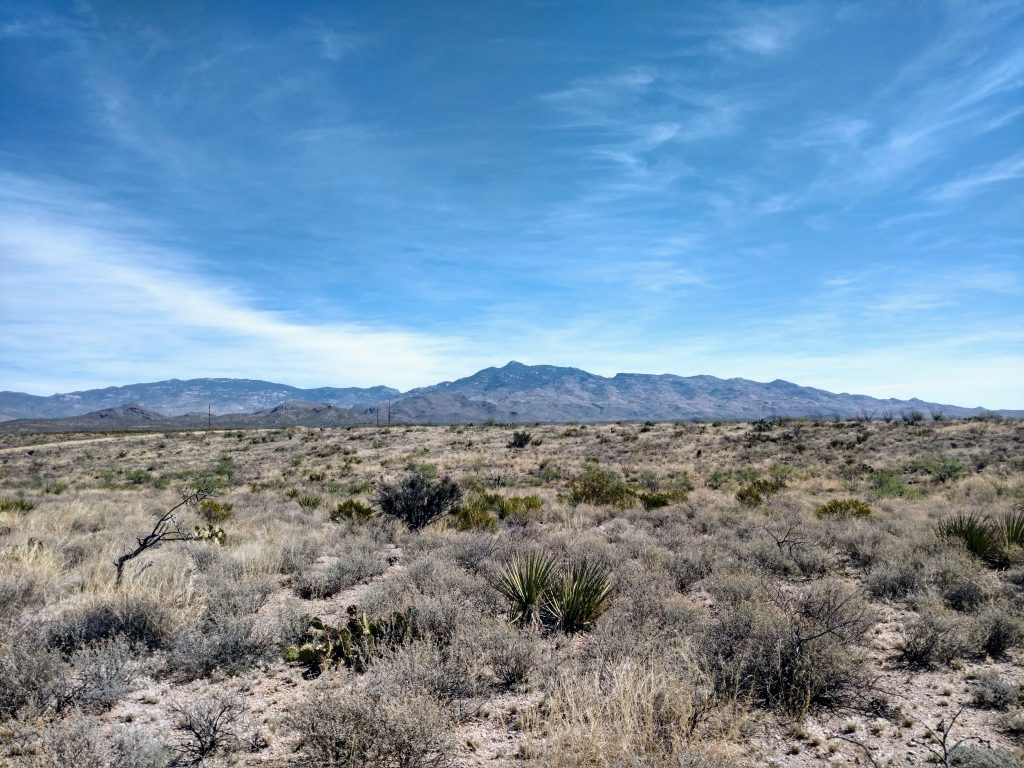 I ran in to John Schilling, and he suggested we stop at “The Ranch” to get a burrito. We rolled down some switchbacks, and pulled in to a small horse ranch at Colossal Cave, there was a gift shop, and a small restaurant, both closed for business. At least there was water. I knew I had to eat some real food, so I cooked up some Lasagna, and drank some water. I could have sat there in the shade and eaten all day, but I really didn’t have that much extra time to dedicate to the ride. The next 100 miles were going to be extremely difficult to ride if I didn’t have a full belly.

It was time to pull the plug. To keep pushing the bike through temps in the high 90s was to big of a risk to take. I talked to Sarah, my wife, and she drove down to Tucson to pick me up. The road I took in to town was almost all down hill, but the headwind was so fierce, it took all I had to go 6 mph at times. I came across a restaurant with an outside bar, time for a Coke. Several other racers showed up, Mike was one. He said he was going to keep going, despite knee problems starting to develop. Shortly after, I made it to Buffalo Wild Wings, and ordered some queso dip, chips, and a Pepsi. I sat there for a few hours, waiting for Sarah and started feeling better. After eating some more food, and several more drinks. I could have kept on with the ride, but can’t miss as much work as it would take to finish the ride.

I learned a lot from this ride, I know I have to find a better hydration plan for when it gets this hot. I shouldn’t have planned on such a short timeline for a ride I had never set tires on before.
I broke my phone screen on night one, causing me to have to use Google Assistant to operate it without touching the screen. My GPS looses track of the upcoming elevation when I try to follow a track over 300 miles. Next time I’ll have to split tracks into smaller sections to retain all info.

The ride was a scratch, but not a failure, as I will learn from all my mistakes, and live to ride better, another day. Thanks for watching and for all the kind messages!