I drew a line on the map last week, then I rode it. I knew it would be hot, I knew there would be mud, and I wanted to ride the whole route, as planned.

I really wanted to hit Tusayan near the Grand Canyon before everything closed. Ideally, the goal, to arrive before 8 so I could get a pizza. 2 am alarm, 3 am departure. For the first 20 miles, everything was soggy and slower than normal but eventually, I made it to dry dirt around sunrise. 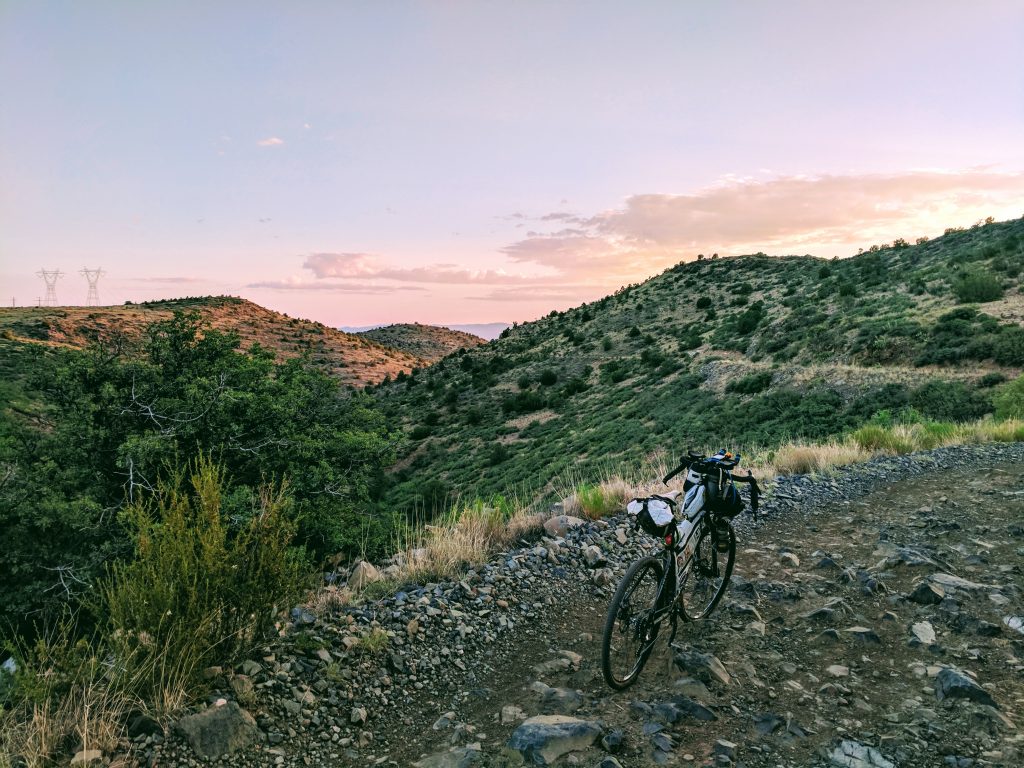 I bombed down the hill into Perkinsville. The temps were still cool as I started the climb out of the Verde River. Parks, the first refill point, was 84 miles into the ride. I bought lots of drinks and carried on my way. After a short section of pavement, the road turned to the smoothest gravel of the whole trip. Freshly scraped for miles. After crossing Highway 180, the road got a little soft, but not too bad. Zig-zagging through old ranches, opening and closing gates in the middle of nowhere. 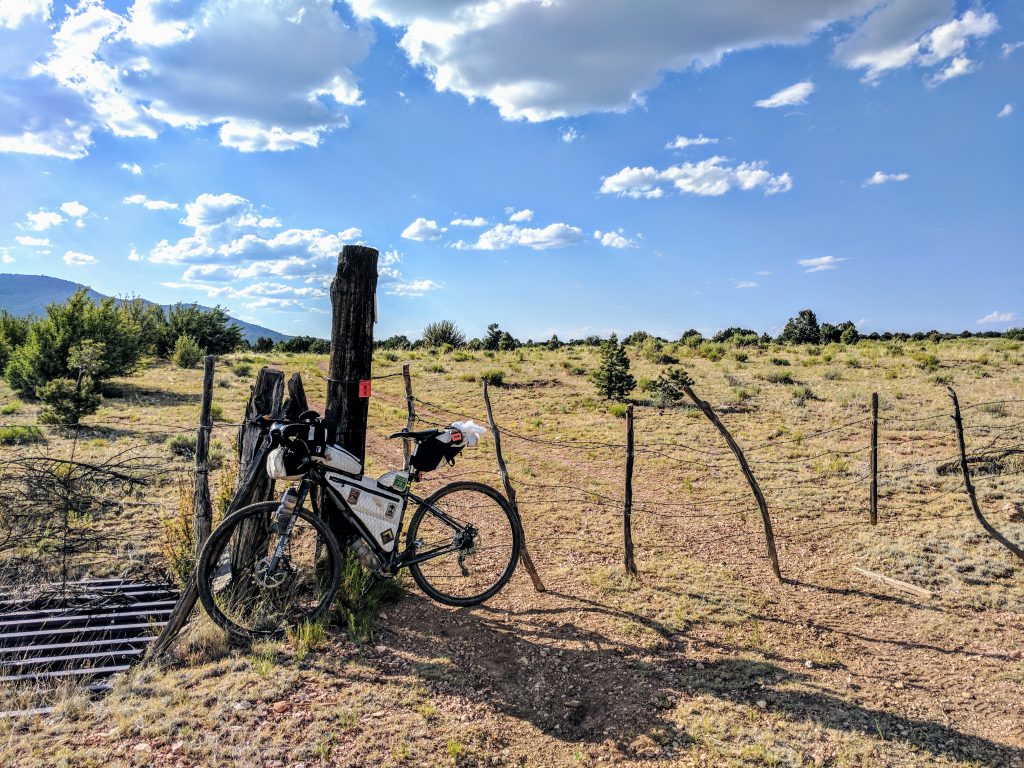 Just outside Tusayan, I spotted two adolescent bull elk. I pulled into the pizza place at 7, almost an hour earlier than I hoped. I ordered my pizza and ran across the parking lot to the general store to buy some extremely over priced food. This was the last refill spot for the next 100 miles, I had to choose wisely. I rushed back to get my pizza and ate it as fast as I could. 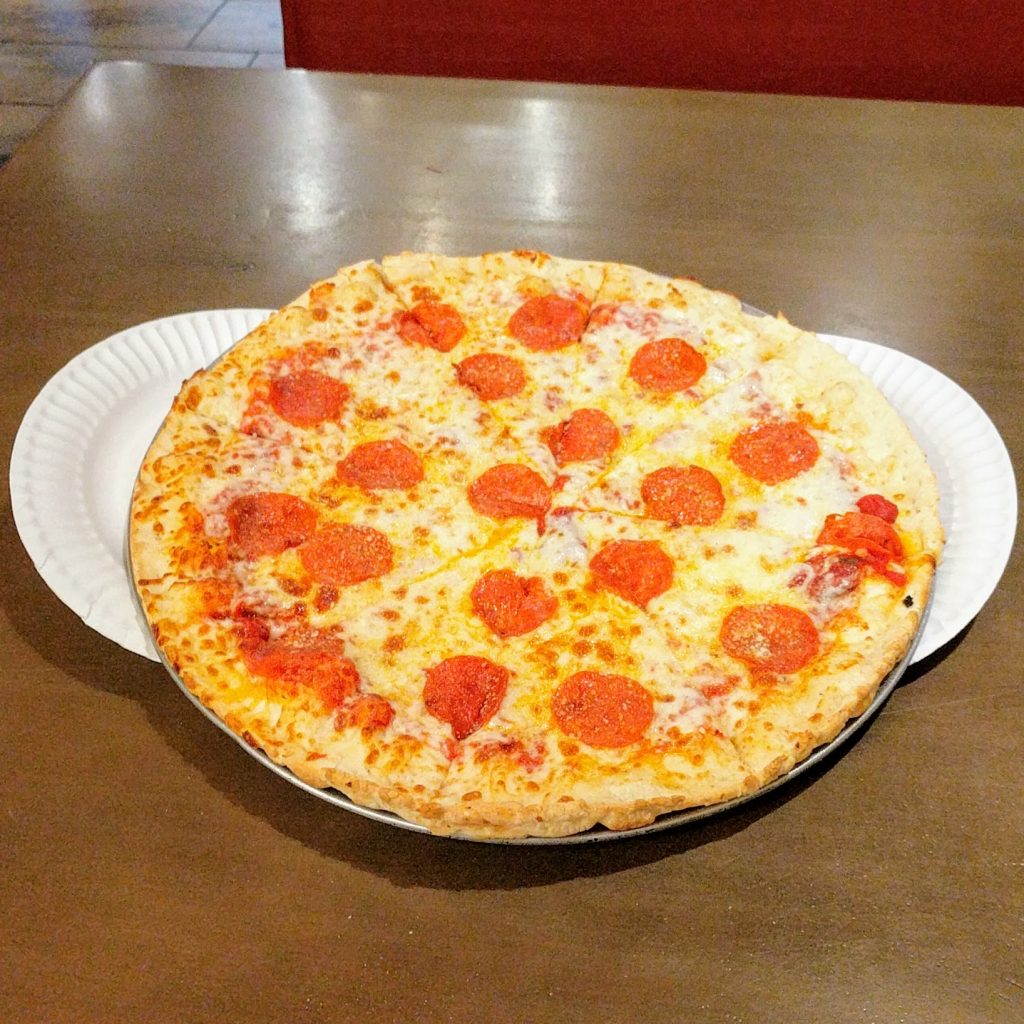 With lots of fuel in the tank, I pushed on in the dark, another 18 miles, to the Grandview lookout tower. On the way, there was a sign for mountain lion crossing, I thought it would be smart to camp near others. I pulled into camp at 10:30, 164 miles in a little over 19 hours.

Friday morning I packed up quickly and went up the lookout tower to watch the sunrise while I ate my breakfast. 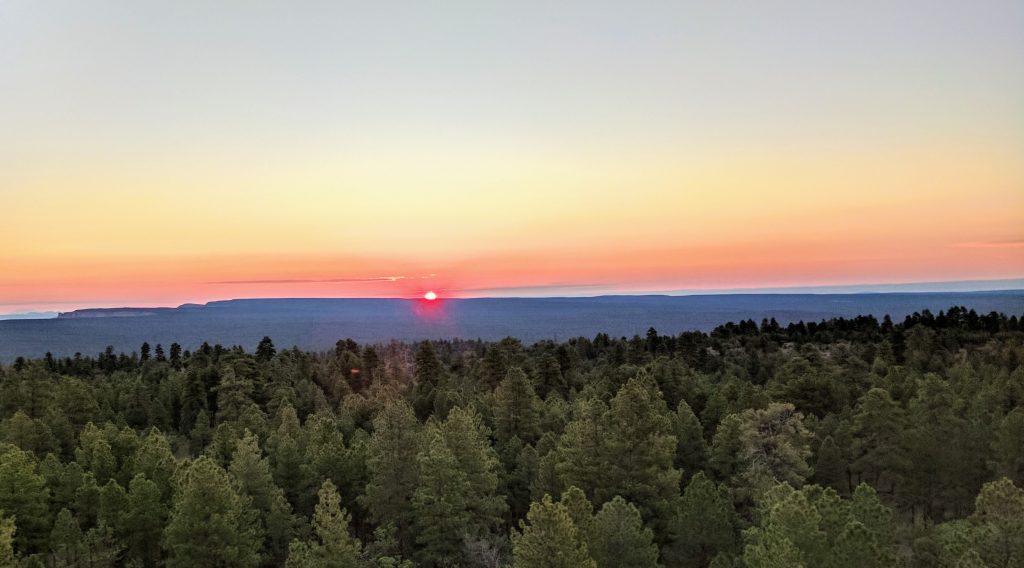 Back on the road at 6. The first few miles were quick, I dreamed it would be a quick 80 miles to Flagstaff. In no time, I was on an abandoned forest road, it was all rideable, just slower than the first day. That led to a bunch of singletrack on the Arizona Trail. 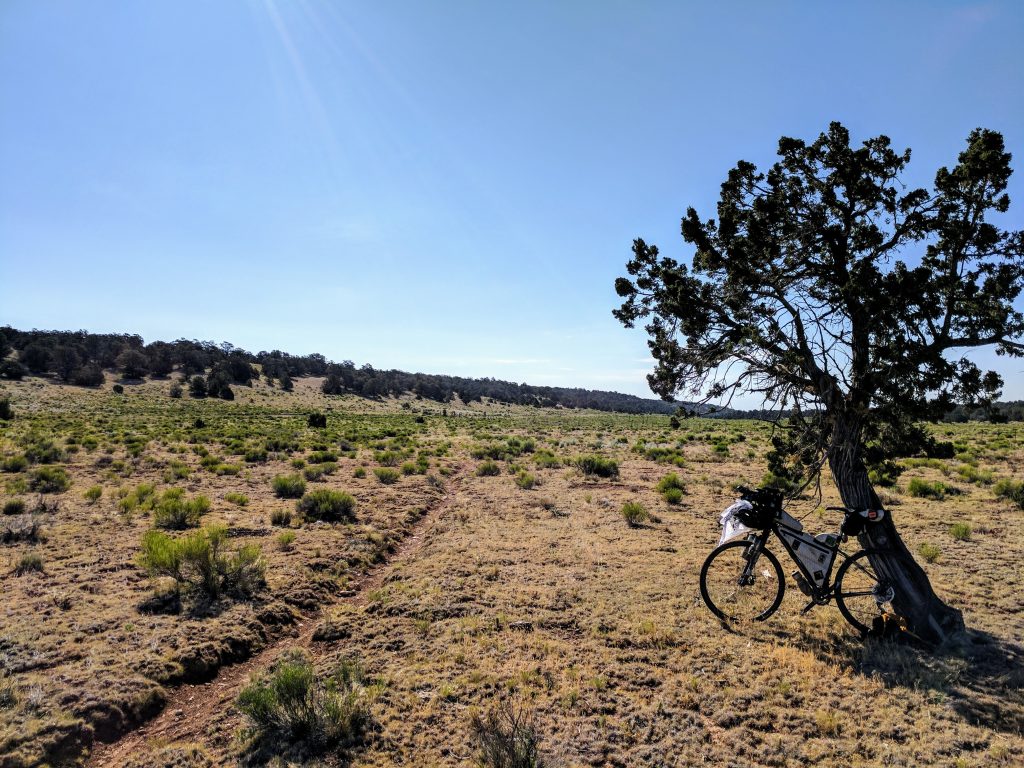 After the first 20 miles, the sun was out in full, and there was virtually no shade in sight throughout the hottest part of the day. Lots of singletrack, rough roads, temps near 100, and no opportunity for water resupply meant taking my time, and stopping for shade when I did eventually find some. 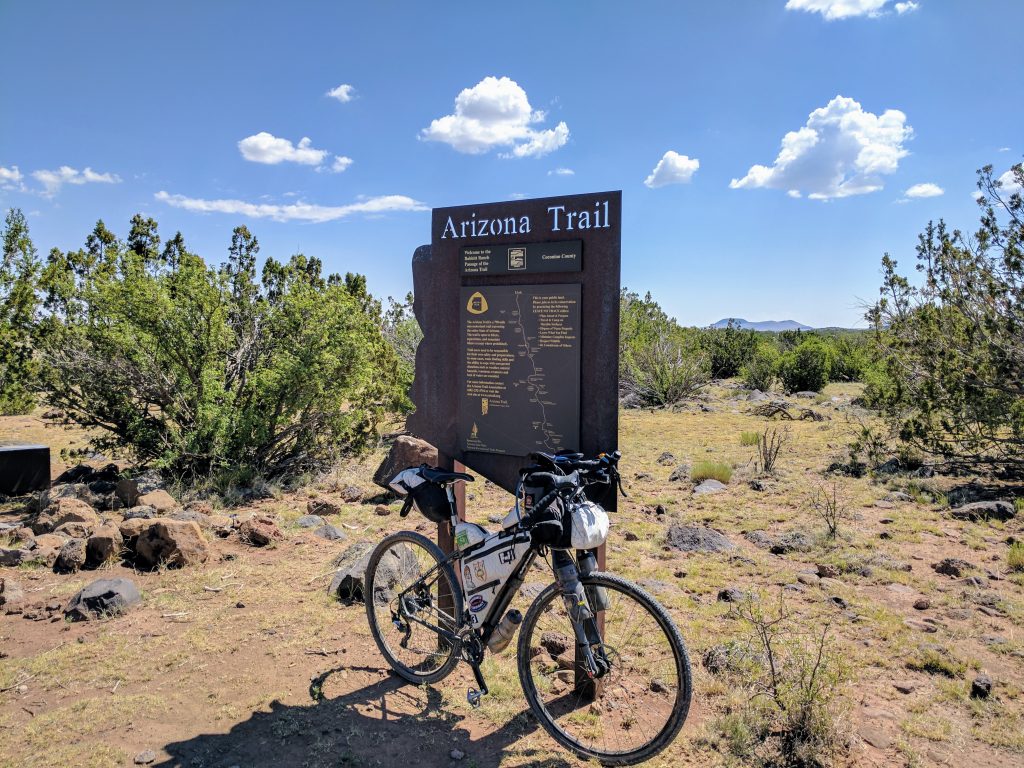 Humphrey’s Peak was drawing closer and there was a big climb coming. I stopped to eat about 700 calories to fuel the ascent. I got plenty of crazy looks as I climbed to Locket Meadow, and even more as I rode up the Inner Basin trail.

The aspen groves were so thick you could not see through them. 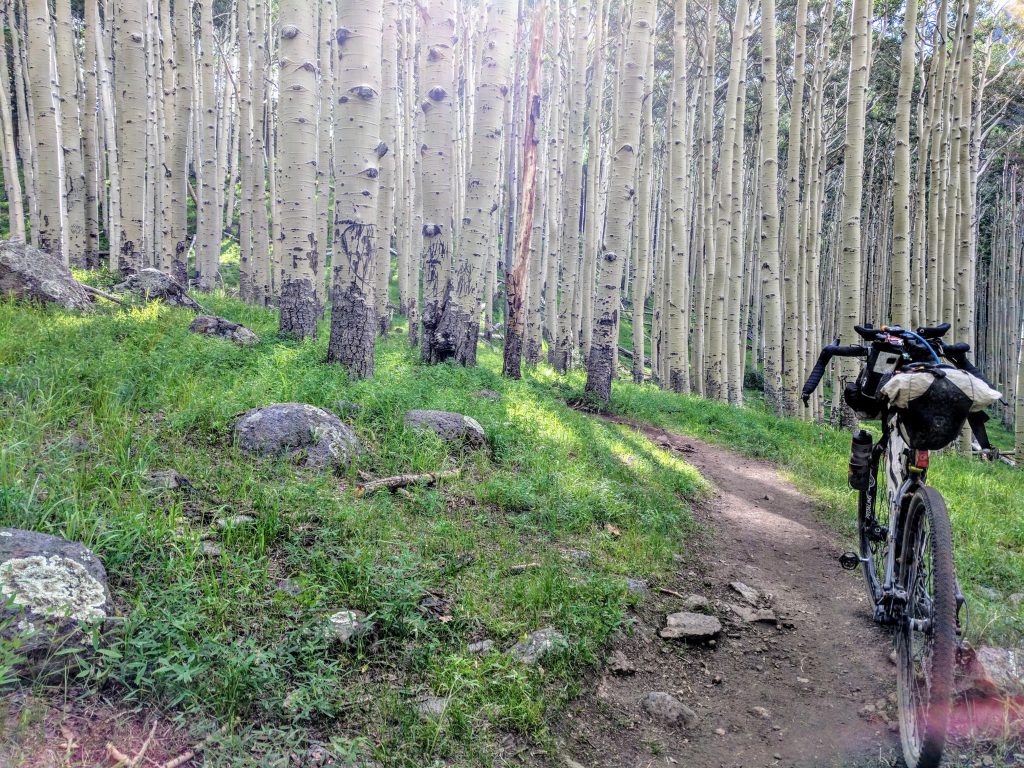 The waterline road was an amazing 10 mile downhill, followed by a bunch more single track. 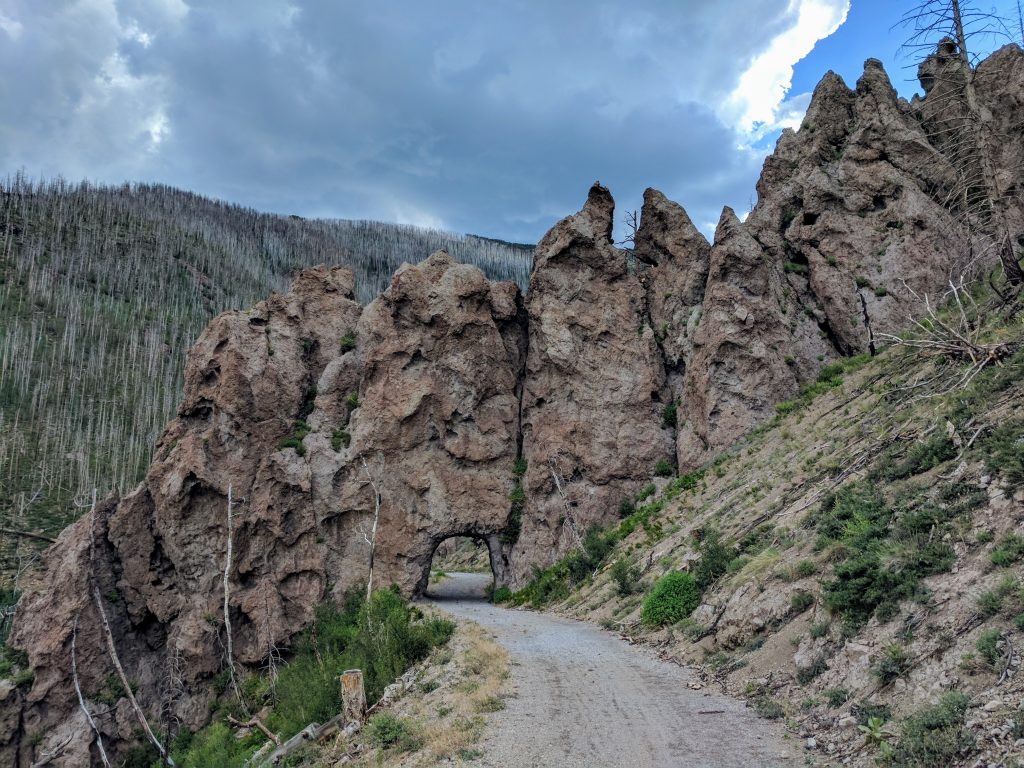 I don’t think the other trail riders expected to see a guy descending on a skinny tire, drop bar bike, with no suspension. I got to Chick-Fil-A just before the monsoon kicked in and it was over before I got done eating. One more refill at Maverick on the way to Woody Mountain Road. The sunset was salmon pink, amazing. 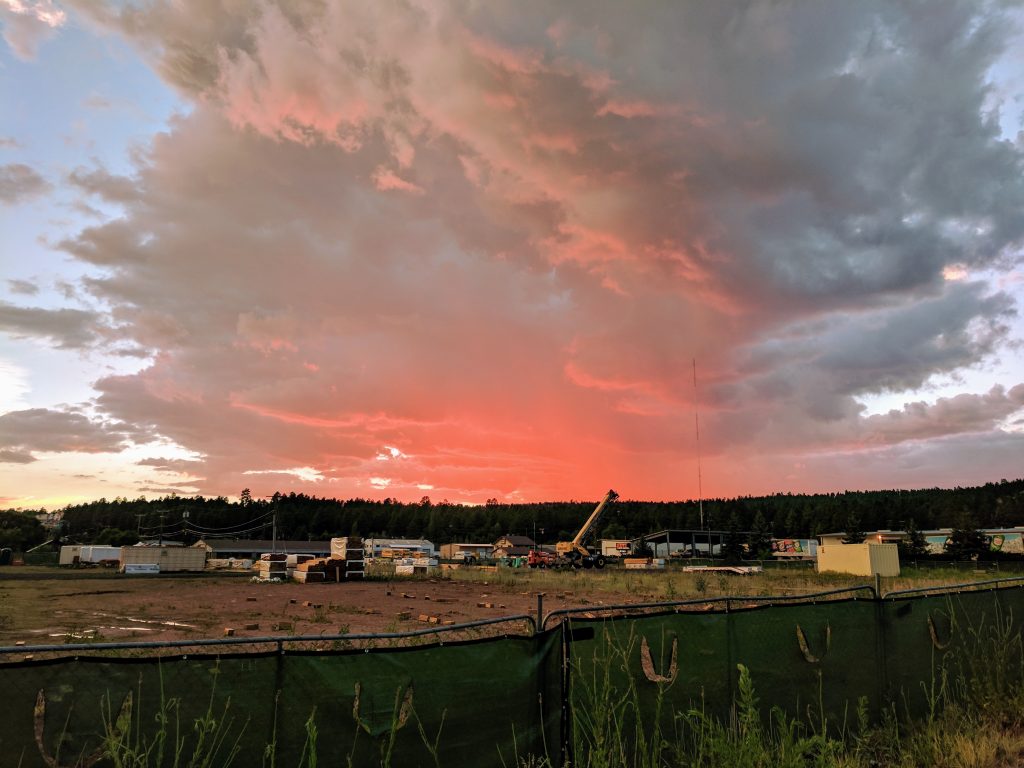 This stretch of gravel was the worst washboard of the trip, I was constantly riding the narrow edge of the road that was more sand than anything else, but lacked the resonating vibration of the middle. After several miles, and several turns onto side roads, the washboard subsided. I somehow missed a turn and ended up following the wrong line for 4.5 miles, my tired eyes thought it was the right color. I turned around and tried to ride back as quickly as possible. I was back on course for about 5 miles when I heard my rear tire pop and sssfffsssfffsssfffsss. I tried to shake it to get it to seal, but after a couple rotations, it would just keep leaking. I pulled out my tools, and then it hit me. I never put my pump back in after my flat tire fiasco the week before. My pump was sitting in the framebag of my other bike. I was 20+ miles from civilization either way. I assessed the food and water I had and decided I would keep pushing forward. If I had to call for help, Cottonwood was closer and more accessible than Flagstaff. Walking would be extremely slow, so I had an idea to use something to stuff the tire to protect the rim, then maybe I could still ride. I finally settled on tree bark as my solution. I popped off one side of the tire and packed in as much bark as would fit and still let me mount the tire. It was a lumpy ride, but it was working, kind of. After being pulverized by rocks, the bark was mashed and now only filled about an 8-inch section of the tire. I pushed on for about 8 miles, taking it as lightly on the rear wheel as I could. I was nearing the last couple climbs before the super steep Casner Mountain trail downhill. It was 1 am, and I didn’t want to make the descent in the dark, plus the scenery was too awesome to miss. I didn’t catch a glimpse of the Grand Canyon, but I’ll be there again soon enough. Casner Trail is a different story though, I don’t know when I’d be back there. There were rocks everywhere, but I managed to find a small patch of flat ground and set up my bivy.

Again, I woke up barely before dawn. I packed up my gear as fast as I could and ate some food as I hiked the next mile and a half.

It was too steep to ride anyway, even without a flat. The views were spectacular.

Very few people get to see this view as it is not easily accessible from any direction. The downhill section was very sketchy with 40c tires and I had to walk a couple sections that were just too rutted to ride. I made it down to FR525c safely, now I was on decent gravel, but I had to go painfully slow with the flat. I stopped in the shade for some granola and almond milk then crawled the rest of the way to Cottonwood. Between the night before, and the morning, I rode almost 30 miles on a totally flat back tire. 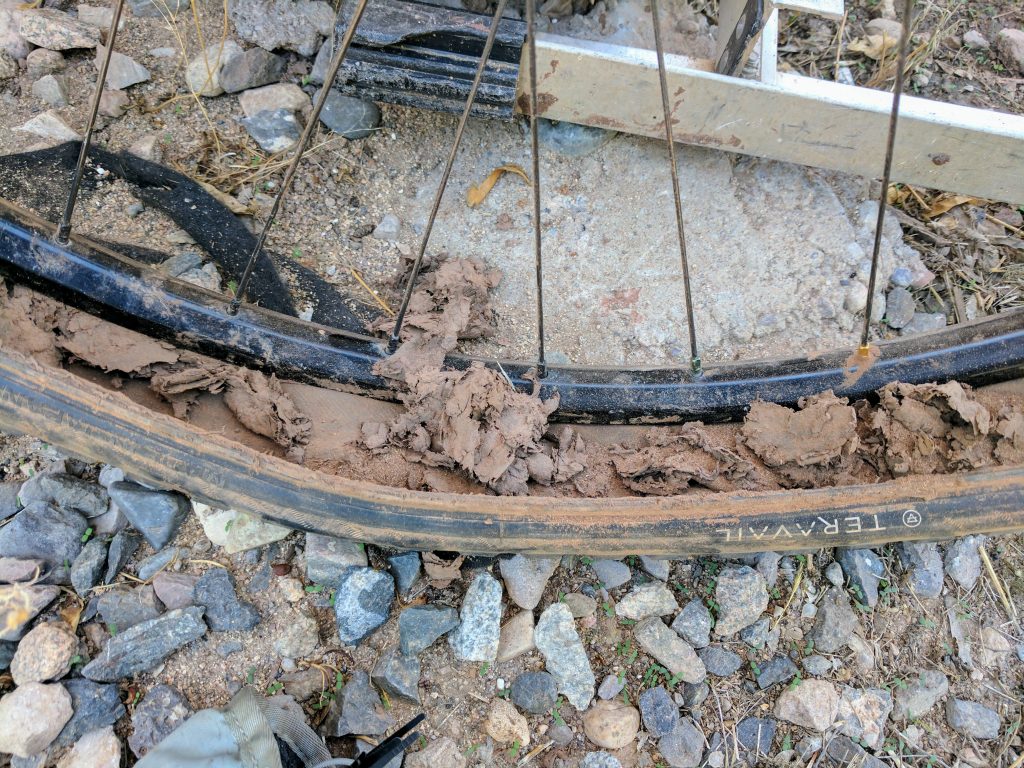 I bought a pump at Zoomers bike shop and put a tube in. The nice guys at the shop gave me cold water and a hose to rinse off with. It was refreshing in the 100-degree heat. Next stop was Colt Grille for an awesome pulled pork sandwich. This place is awesome, I highly recommend stopping here on an epic ride. With a full belly, I had one final stop to make before the climb over Mingus. I filled all my bottles and bladder with ice water, soaked myself with what was left, and took off up the nasty dirt road. Many sections were just too steep for the skinny tires to keep enough traction to maintain forward momentum, so I put my head down and just hiked through it, stopping every 250′ gain for water. Just as I reached the top of the steepest part, the skies clouds grew large, and I could hear thunder in the distance. 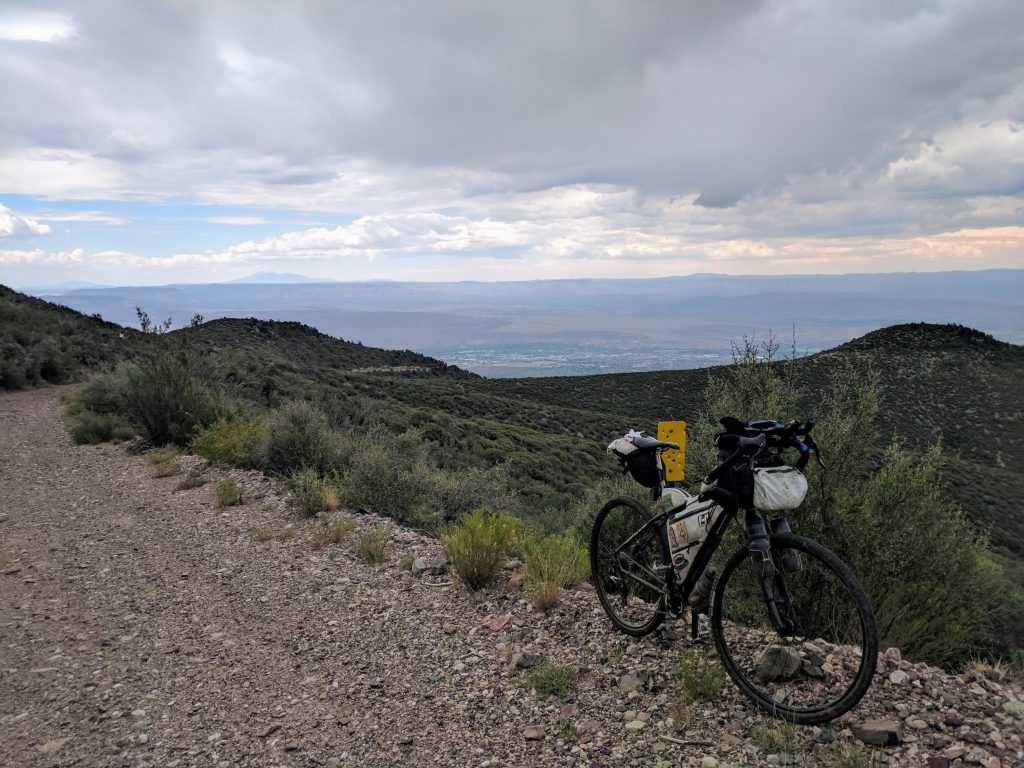 This was the whole reason I rode the skinny tires, I knew from the top of Mingus, all the way to the Peavine trail there was potential for death mud. 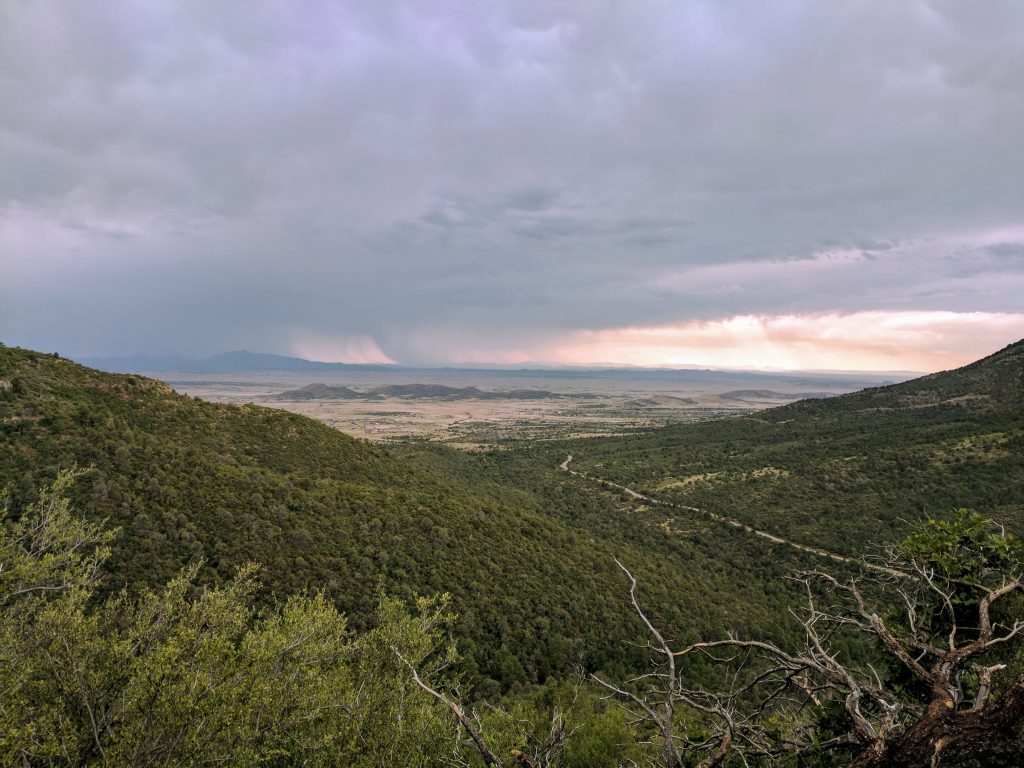 The skinny tires left plenty of room for clearance and I never had to stop to clear the mud. That said, they still weighed a ton and slowed me down plenty. Trail 533 was lots of fun with drop bars too. I only had to stop at one tiny rock step, because I was worried it could pinch flat my rear tire. I crossed 89a and went through the green gate. The gravel road was a roller coaster of ups and downs, but I could still ride. After jumping the fence to the power line road, it was a different story. Mud then steep gullies, too rocky to climb out of. 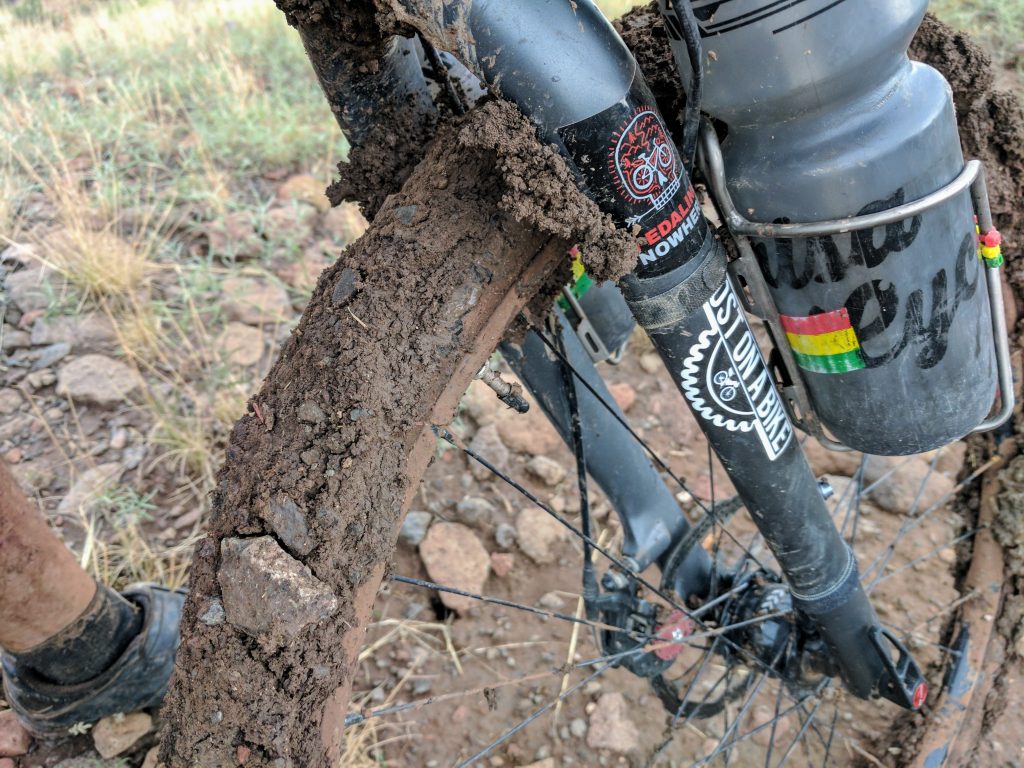 Mud, rocks, hike up, repeat, for almost 5 miles. Finally, I made it to the sub station and to dirt that had the potential to be good.

For a few miles, the road was dry, then it turned to a horrible muddy mess. Tires spinning, sliding out, splashing in puddles, and trying to figure out how to open and get through gates without tromping through ankle deep mud. 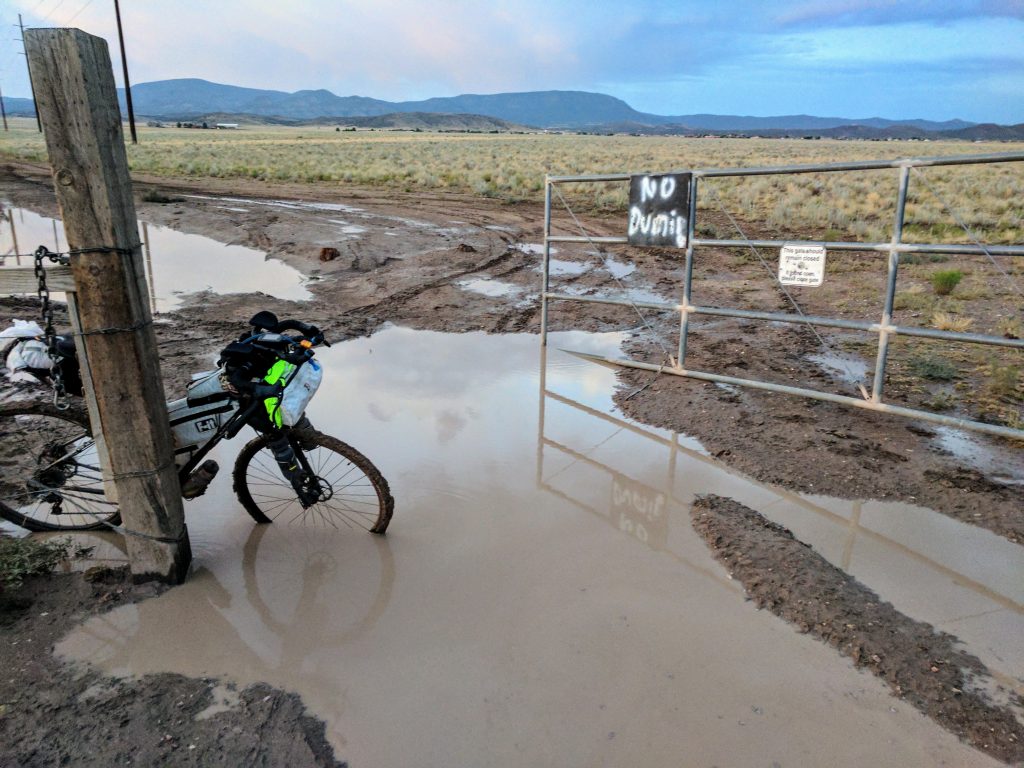 Even the Peavine was mushy enough to slow me down considerably. As I passed the High School, the rear tire lost air again, good thing I was only a block from home. Longest 77 miles of my life, almost 16 and a half hours.

I learned a few things on this trip, a pump is like an AmEx card, never leave home without it. I can ride 100 miles in the heat without a refill, and make sure you put on sunscreen before you start sweating your ass off.

Arizona is an amazing place, especially when traveled by bicycle. There are ways between towns where you may not see another soul for a whole day. You’ll never know what you can do if you don’t try, in this case, I drew a long line and rode it, no matter what. Even though it was hot and terrible, it was incredible to see how far I could go. 363 miles in 3 days.