The forecast was calling for temperatures to reach 64° on Friday, and I was going to be dammed if I wasn’t going to try and take advantage of it.

Luckily I work in an industry that allows me to not work in an office all of the time and Fridays are my work from home days. But I was a goon and left my MacBook charger at the office and the other charger that we have at home only fits an older model MacBook Pro. I wasn’t about to trek all the way to the office to get a charger, so I found a Mag to Mag2 converter from Best Buy which was great since I didn’t have to drop the extra 60 bucks for brand new charger. So, I decided that I’d make a little journey out of it and go grab lunch from somewhere after I picked up my part from Best Buy. I bought this bike about two years ago off of Craigslist for 80 bucks. I wanted a bike that I could use to quickly commute with when I was working in Wheaton. It’s not a super great bike, but it was cheap and works great for getting from point A to B and I can throw it on a trainer and use it indoors (which is where it was before this day). But before I could get it ready to go, I was having some major shifting issue while I was using it on the trainer. I has purchased a new chain for it and adjusted the front derailleur, which helped relieve some of those issues, but it was still skipping gears every so often. I wanted to kinda clear up some of that skipping so when I got up that morning, I took it off the trainer, swapped out the back tire, pulled the cassette off and soaked it in some degreaser and scrubbed the shit out of it. 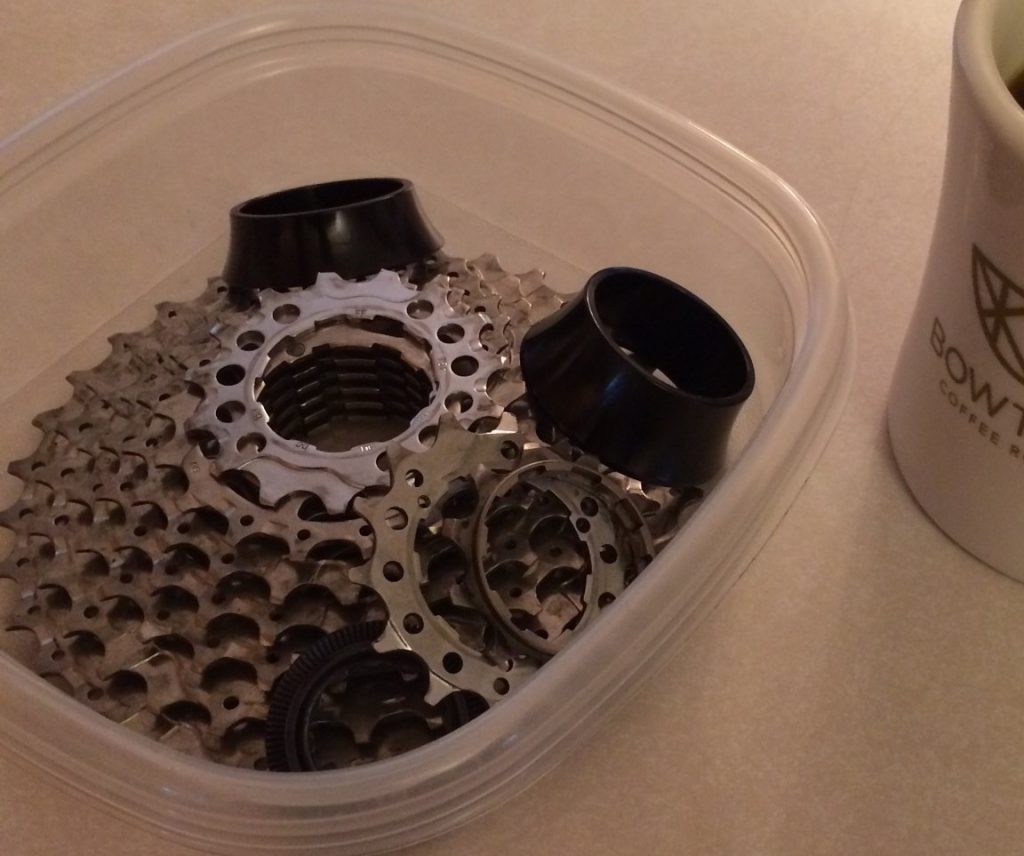 I had some other parts that I needed to clean too so I threw them all in and took care of it. Once I got them cleaned up and dried, I put it all back together, added some more chain lube, and added some tri-flow to the other moving parts on both derailleurs. It’s amazing at how much smoother it started to shift by doing that. I’m not about to invest a ton of cash into this bike, so whatever I can do to make it perform better works for me!

After I got everything put back together, I did a little work, answered some emails, and began my trek up to Best Buy.

There were two items that I wanted to test out on this trip. 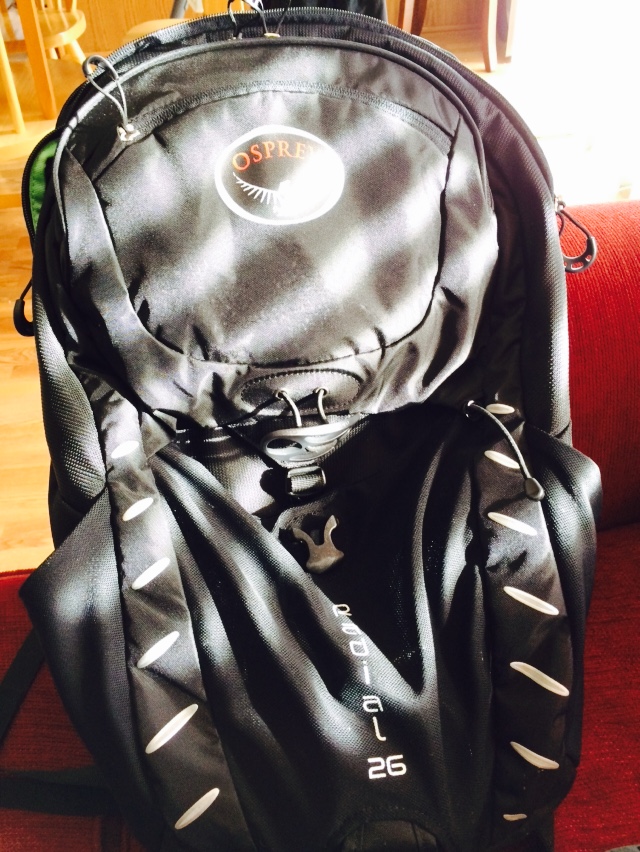 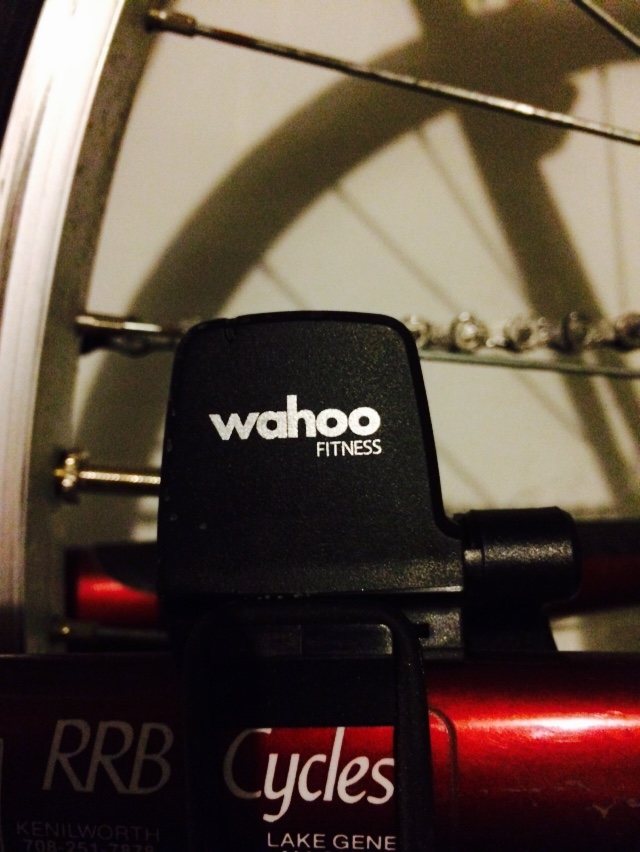 One was my Osprey Radial 26 backpack.

Since I wanted to do some work while I was out, I needed to bring my laptop. I had bought this pack for my wife since she walks to and from the train station to her office building during the week and she wanted something that she could easily carry a computer and other items that offered more support than her previous messenger style bag. I was using an Osprey Momentum 36 for myself, but when I went to order the same pack for her, Osprey discontinued that style of pack and I opted for the Radial 26 instead. Since it’s a commuter backpack the Radial is pretty rigid, and when she used it she didn’t like the stiffness from the integrated frame in the Radial. So we swapped and I had since yet to use the Radial 26 on a bike until today.

The other thing I wanted to test was the Wahoo BlueSC.

I bought this to use as a bike computer, but I also wanted something where I could keep track of my indoor spin workouts and this product seemed to fit the bill. It’s a wireless Bluetooth 4.0 and ANT+ speed sensor that connects to your phone via Bluetooth with their app.  They say it’s also a cadence meter, but I have yet to see that work within the app. But it does measure RPM’s and with the Wahoo app, it will record your workouts and also has GPS so it will track your route as well. The other cool thing is that you can export your workouts in a variety of file format and then upload them to other programs. For me, I’m able to export out to a .TCX file and upload them into Endomondo so I can keep them within my Endomondo workouts too. Wahoo says that they are working on integrating the BlueSC with Endomondo directly, but that hasn’t happened yet. But I can still export and import so that works just fine for me.

I had never ridden that far out from my house before, and I wasn’t sure of the best route to get to Best Buy. I looked up some directions with Google Maps, and I picked a round that appeared to be the quickest and relatively the safest as well. Illinois is not well know for its sympathy for bikers so there is quite the lack of paved areas, paths, and sidewalk in and around where I live as well as courtesy from drivers so I try to pick routes where there is not the most amount of traffic or at some sort of paved sidewalk or path. On top of the fact that I didn’t want to get completely lost either, but hey, that’s part of the fun, right?

We’ve had a good string of warm days recently, but there was still quite a bit of snow in some part and most of the lakes and retention ponds were still frozen over. 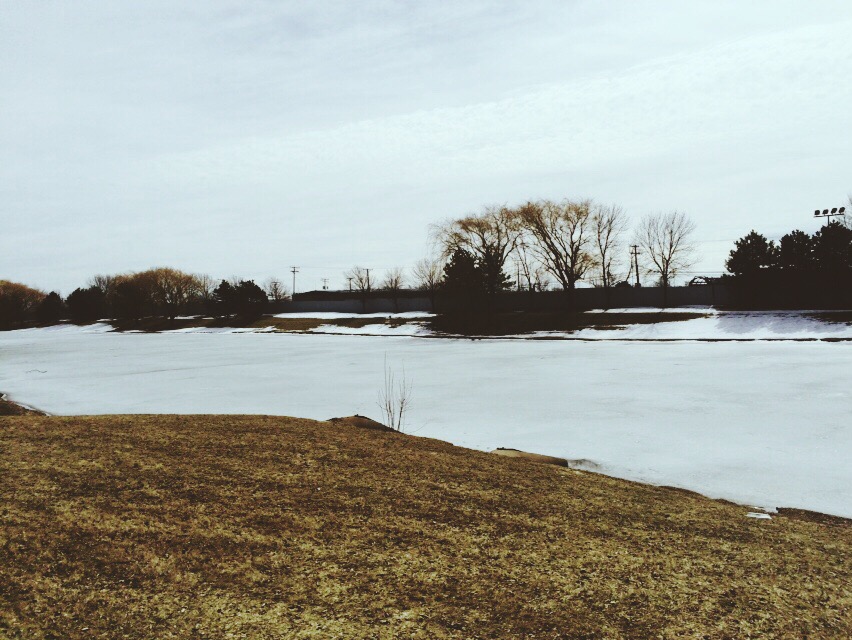 But it was warm out and I was having a great time just being out.

I had fired up the Google Maps app with the route I was taking, but I don’t think it could keep up at the pace I was riding cause it was giving me some wack ass directions and having me ride on long sections of road with no shoulders in traffic. It was a good thing that I has a set of Kenda Kwick CC tires on the Trek cause there were a few instances where I had to ride in the soft, partially muddy grass.

Once I got out of the back roads that Google thought was a “good way” to take, I was able to get back on some pavement, and to my surprise I found a bike lane. 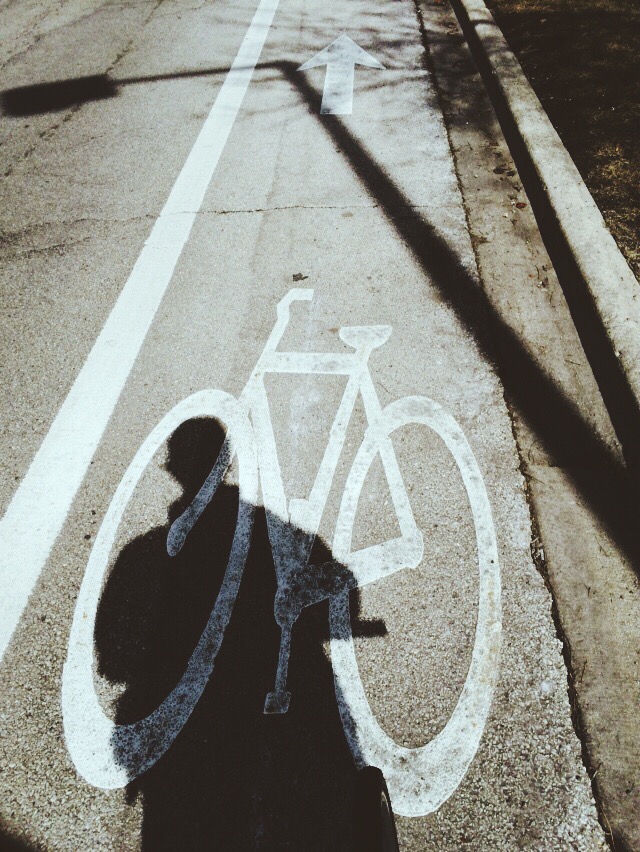 Despite living in the burbs, there are a few small gems in the area that really offer up some views for you to look at. Even if everything is still frozen over. 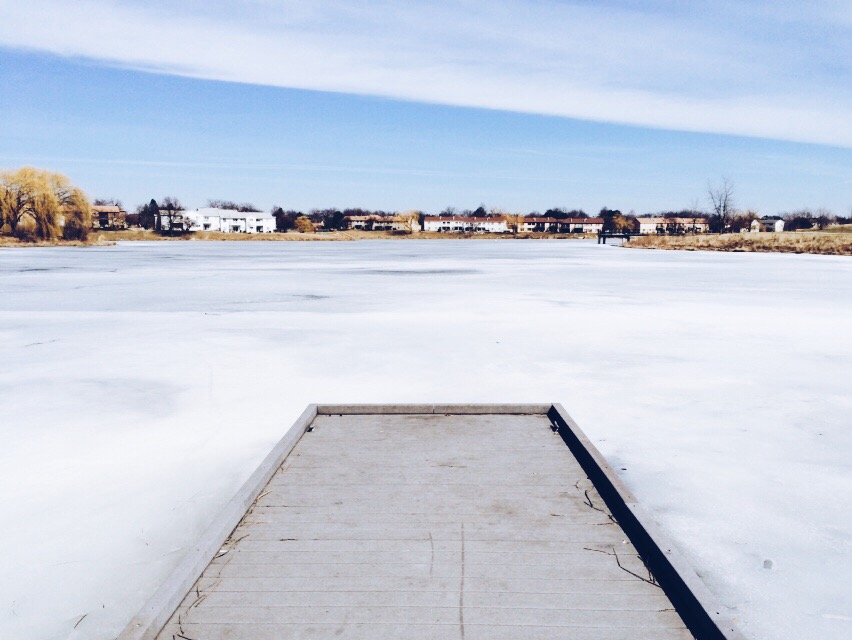 I’m also amazed at how much garbage is exposed when the snow starts to melt.

I can understand that some of it is blown away from what people set out on garbage night, but still. We can be smarter about this.

I took about 32 minutes to get to Best Buy with the route that Google Maps had me take, which was close to what their estimate was. 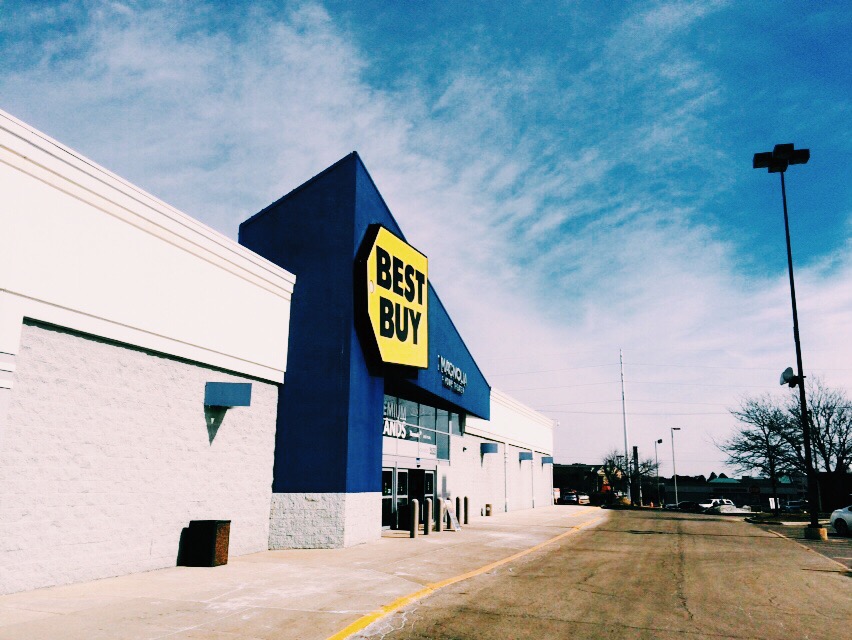 Overall distance about 5.83 miles from when Wahoo started to track my route to when I stopped the app at Best Buy.

Once I picked up my Mag converter, I hit up Panera for some lunch and did a little work.

The internet at that Panera location was pretty slow, so I only did a few things before I decided to head back home.

Instead of using Google Maps, I decided to take a different more scenic route via the Wabaunsee Prairie path. 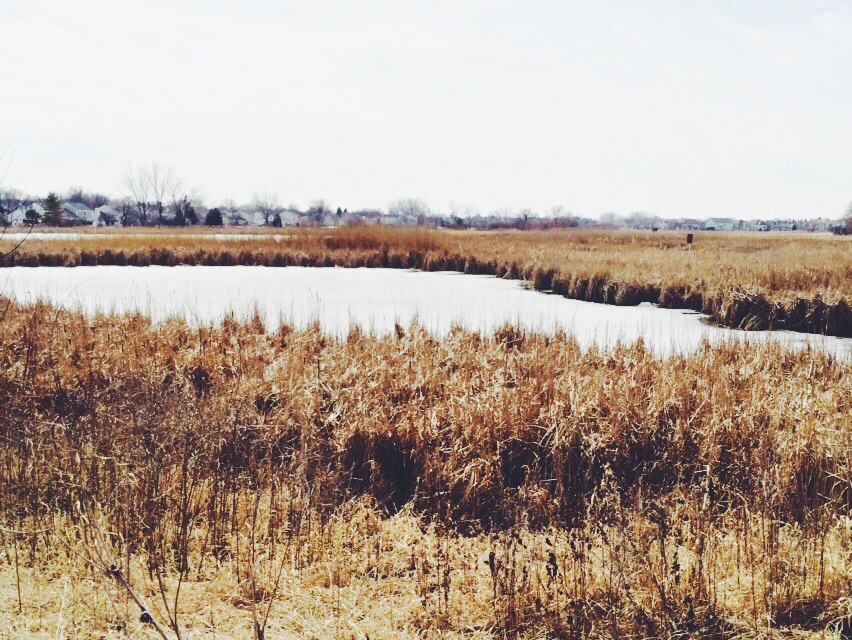 It may have added a few extra miles, but I could have cared less about that. It was beautiful outside and I just wanted to remain out here as long as I could. 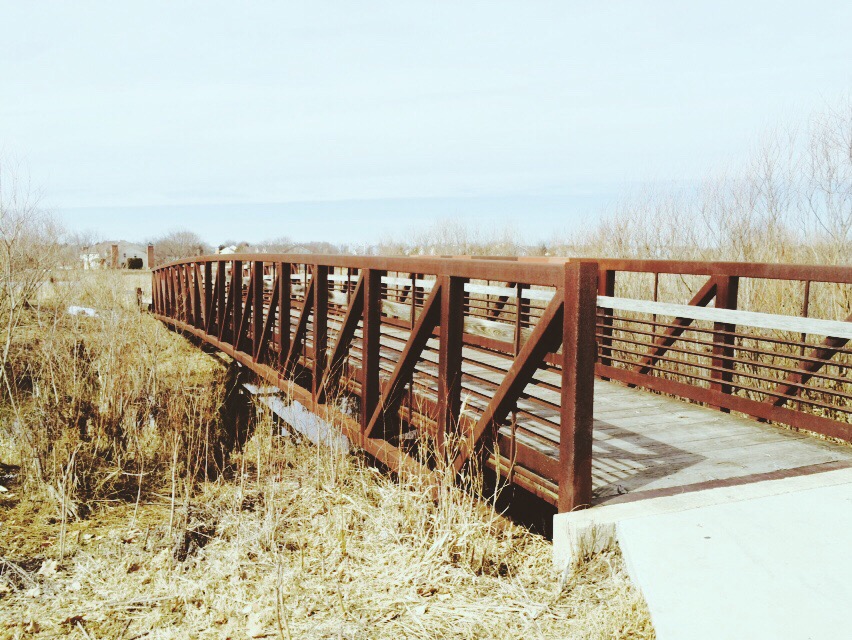 Once I got closer to home, I decided to hit up the liquor store (the jip joint) and grab a couple bombers to end out a really awesome day. 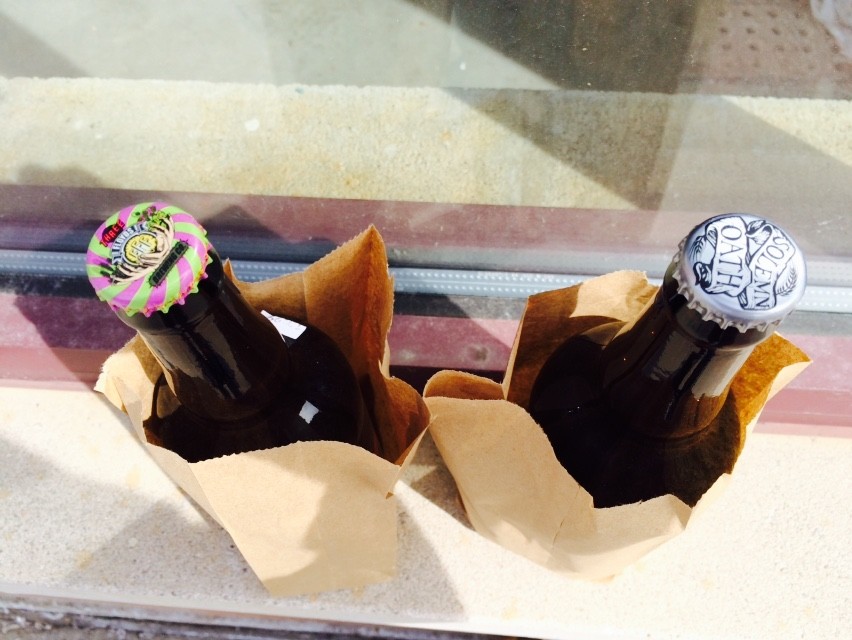 The route home to about 49 minutes and totaled roughly 7.55 miles for a grand total of 13.38 miles round trip.

The Wahoo BlueSC worked out great and held up even when I dredged through the muddy parts.

The Radial 26 pack felt great too. Didn’t experience any fatigue with it on my back and by the end of the ride I had stuffed my coat and two large bottles of beer along with my 15″ MacBook Pro, charger, bike lock, sketch book, and Samsung Galaxy tablet. So there was quite a bit of weight that was on there and the Osprey Radial dispersed it quite well.

I’m not sure if I’ll put the Trek back on the trainer. I’d like to keep riding outside as much as possible, but between work and being a Dad, riding on the trainer is the best I can do during the week. But it is still very early in the season for us, so as the the snow melts and the trails dry out, there will be more opportunities for more adventures.

Photos taken with an iPhone5s. Edited with VSCO Cam.