For the last few years, John Schilling has hosted a tour around the area east of Phoenix. Until the week before this ride, I had every intention of joining the Salty-Gila tour. The weather has recently been so nice in Prescott, I decided I would enjoy a loop I had been eying for a while.

The first day of the trip was to lead me from Prescott to Jerome, then on to Cherry. After a few miles on the streets, I was on the old railroad grade of the Peavine and eventually the Iron King trail. 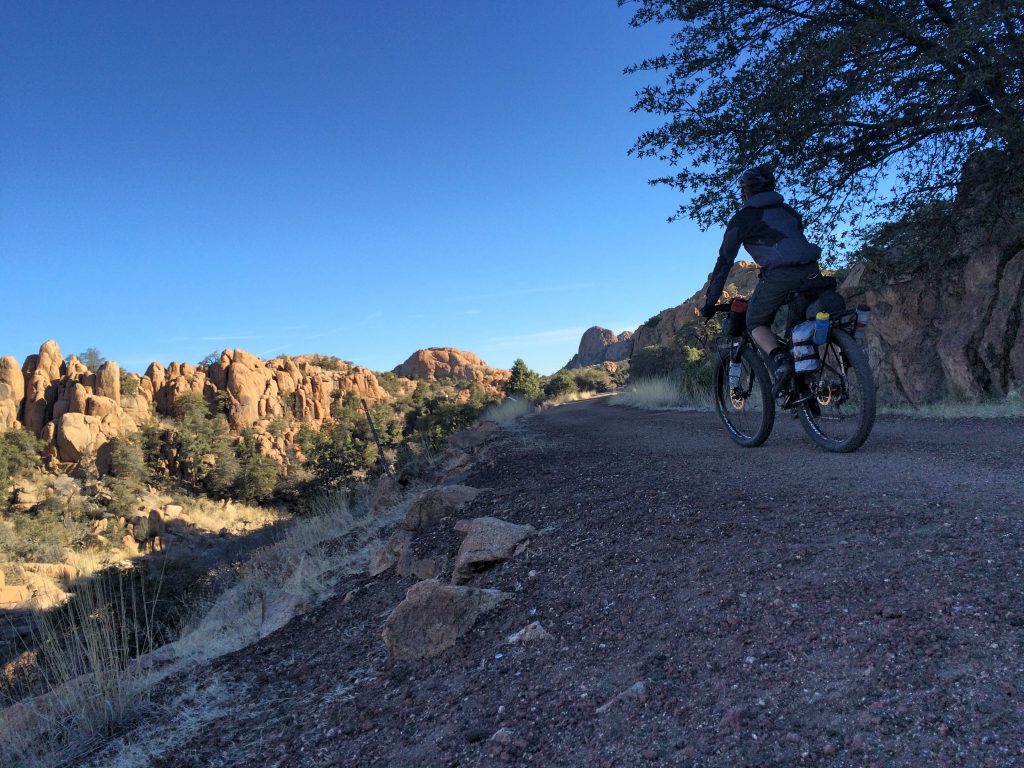 My first glimpse of the Demon of the Day. Mingus Mountain, off in the distance. After Hitting the road for a brief stint, I made sure all my bottles were filled at Robert’s Market in Prescott Valley before heading to Coyote Springs Road where I got my windmill shot for the day.

The gravel roads to Jerome are pretty decent. The old railroad grade actually goes around the highest part of the mountain and drops back down to Jerome. Remember, Jerome is about the same elevation as Prescott. Soon enough, you’re presented with breathtaking views. 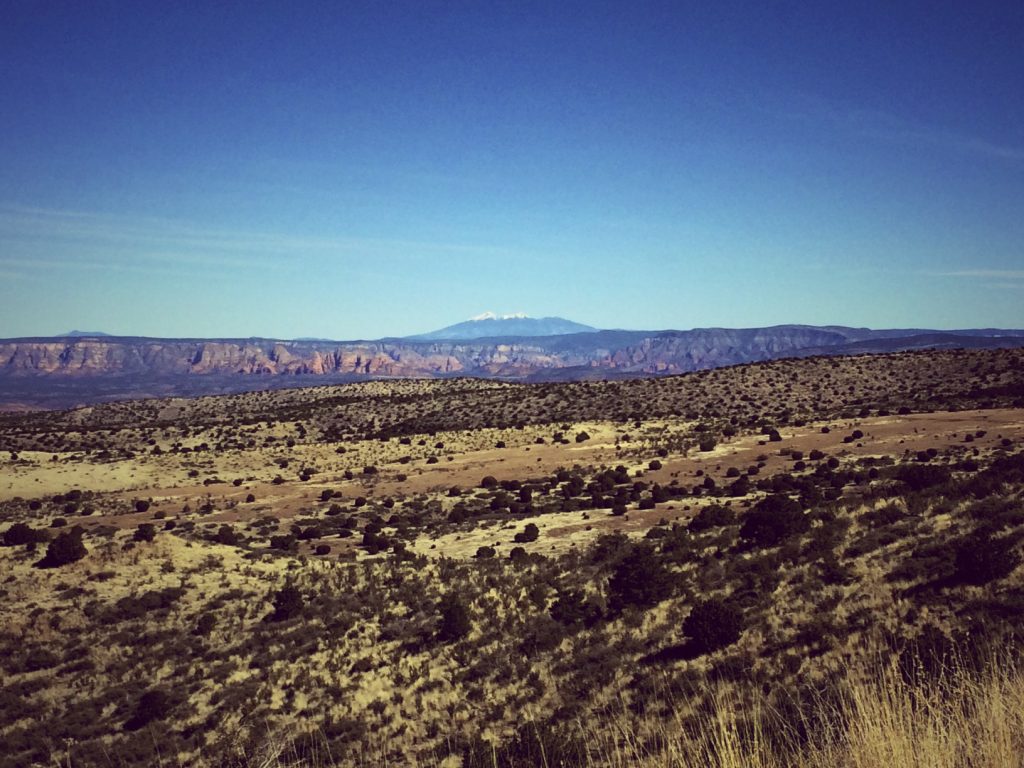 After rounding a corner, you finally spot the pass over the mountain. 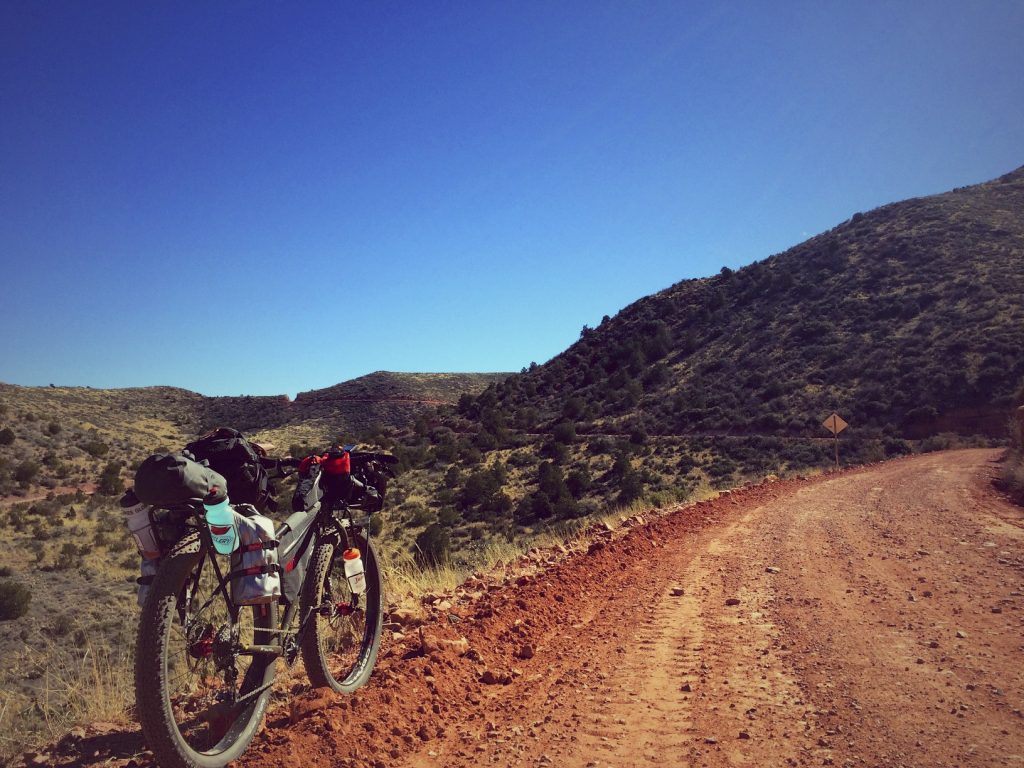 After a high speed decent into Jerome, the ECR decided it was time to pose for a photo with some old junk. 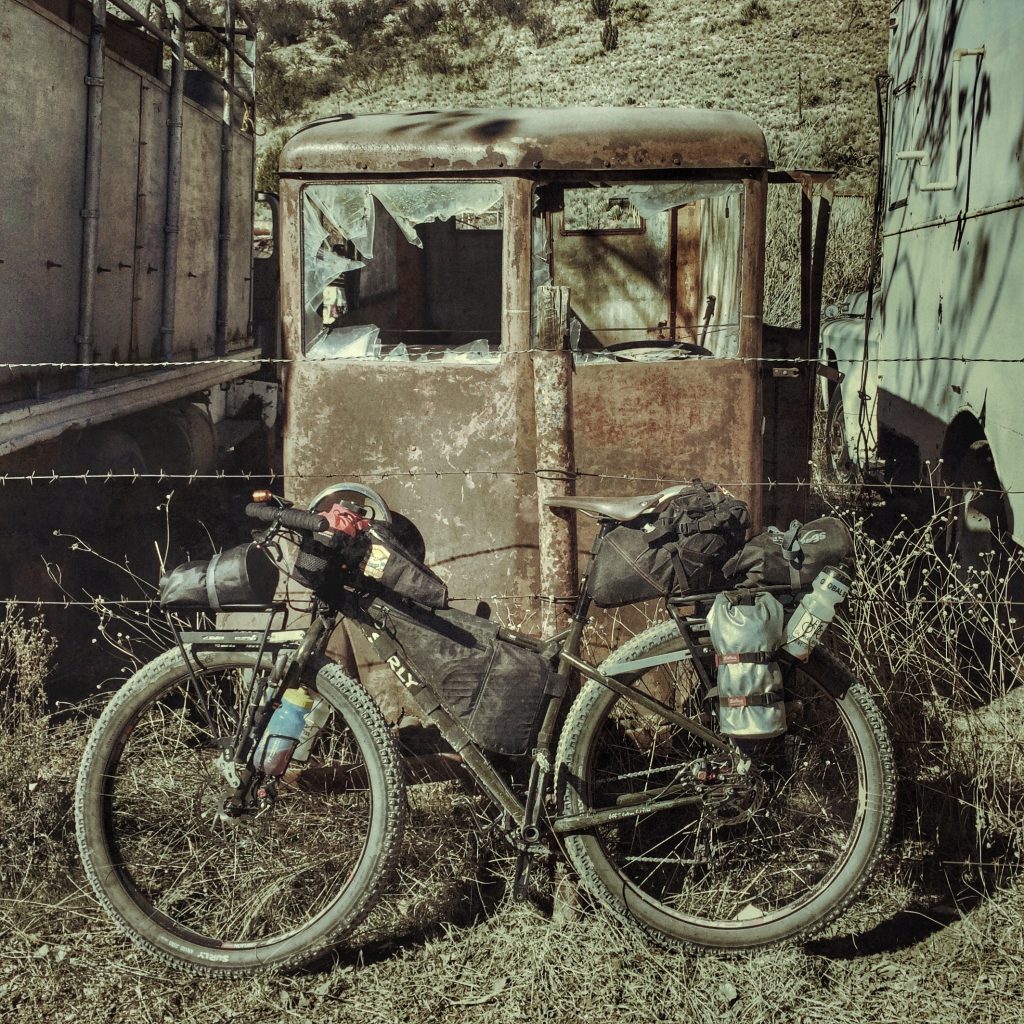 I got to enjoy an amazing lunch at Mile High Grill before embarking on the hardest part of the day. After leaving town, the road runs up and up around the south end of Mingus on the way to Cherry. You can see the road I took up on the far side of the canyon.

After finally finding my way to the pines, I was rewarded with a quick decent, then made camp above Cherry before sunset.

A chilly morning led me down into Cherry and the sun to warm me up. 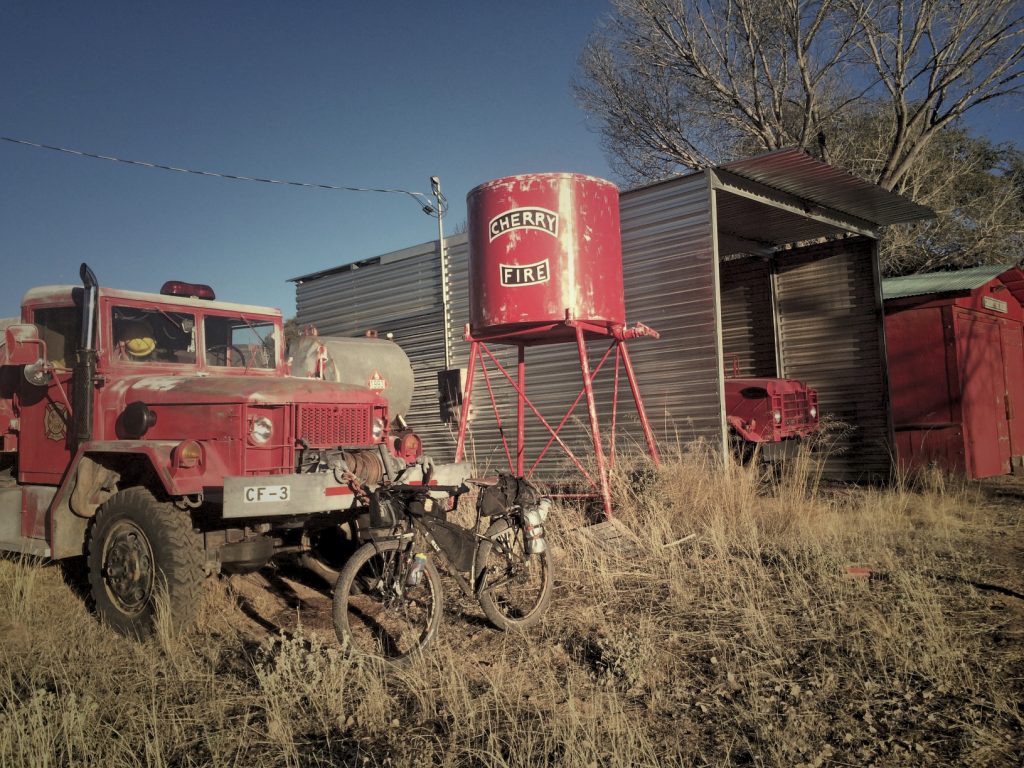 The first 20 miles of the day were all downhill on the way to Camp Verde.

After making it to Camp Verde, I gobbled up breakfast at McDonald’s. I was waiting for my food and looking at my maps for the day’s ride when I was approached by a lady. She asked where I was riding today, and told me she and her partner were planning on riding also. She asked what I was riding, and when I told her, my mountain bike, her jaw about hit the floor. She was excited about a motorcycle trip, but couldn’t believe anyone would be pedaling all that way. We bid each other safe travels and I was off to refuel at Basha’s. As I headed down highway 260, someone yelled out the window out me, come to find out, it was one of my coworkers on his way to Payson. Perfect timing! A few miles later, I was on the gravel of Fossil Creek Rd. on my way to the Verde River Crossing. As I was heading down the road, a couple in a Jeep stopped me to ask if I new how to get to the Pyramid Formations. After I told them I didn’t know, I was from Prescott, they asked if I knew their daughter. It took a second for us to figure it out, but I have ridden with their son in law in Sedona. Small world. I kept on and made it to Fossil Creek just in time to filter some water. 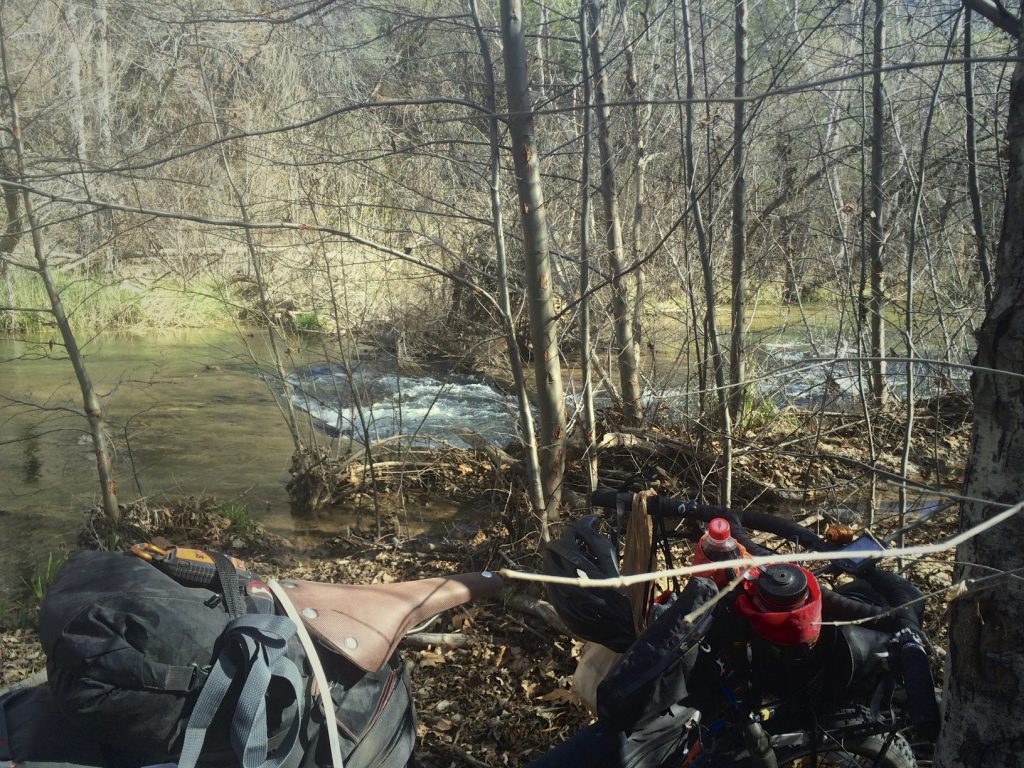 And enjoy the sandwich I picked up at Basha’s 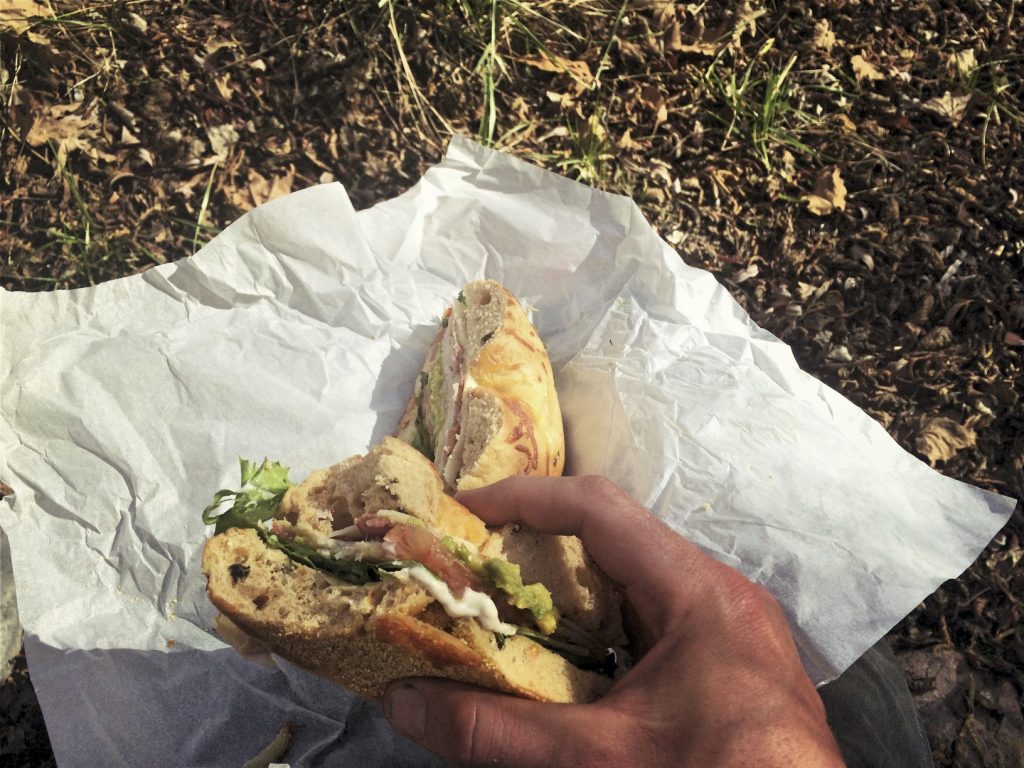 One last climb, then on down to the Verde River. 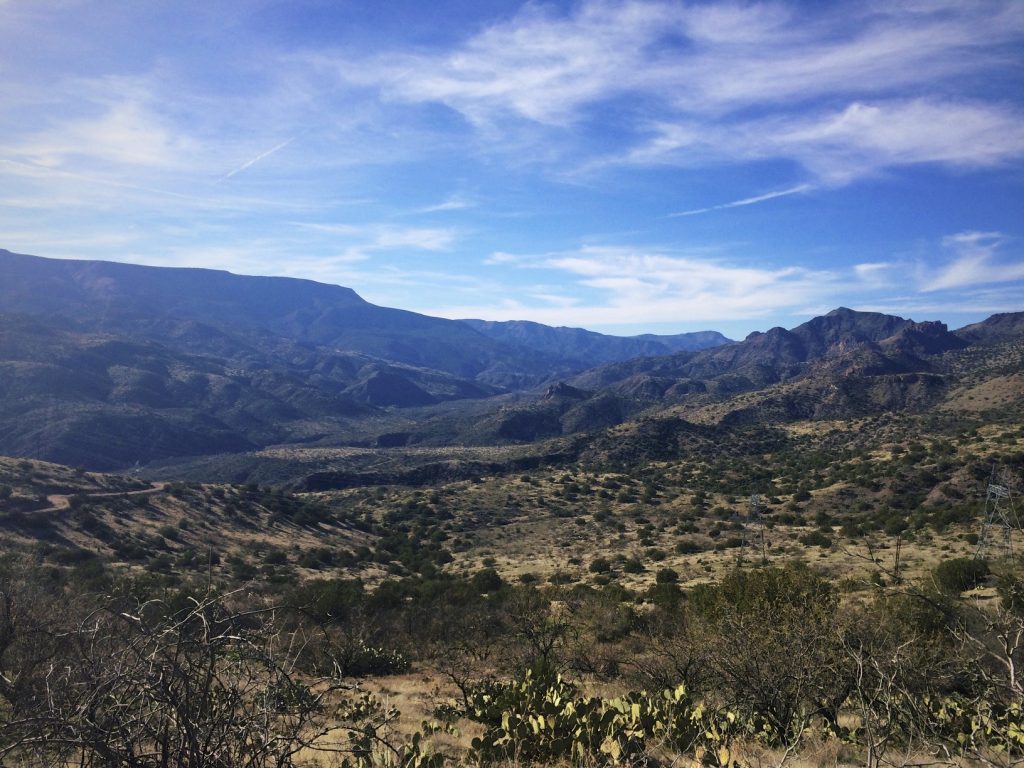 I followed the river upstream a little until I found where the vehicle crossing used to be. This is where I waded through thigh deep water. Good thing I use drybags for all my stuff. 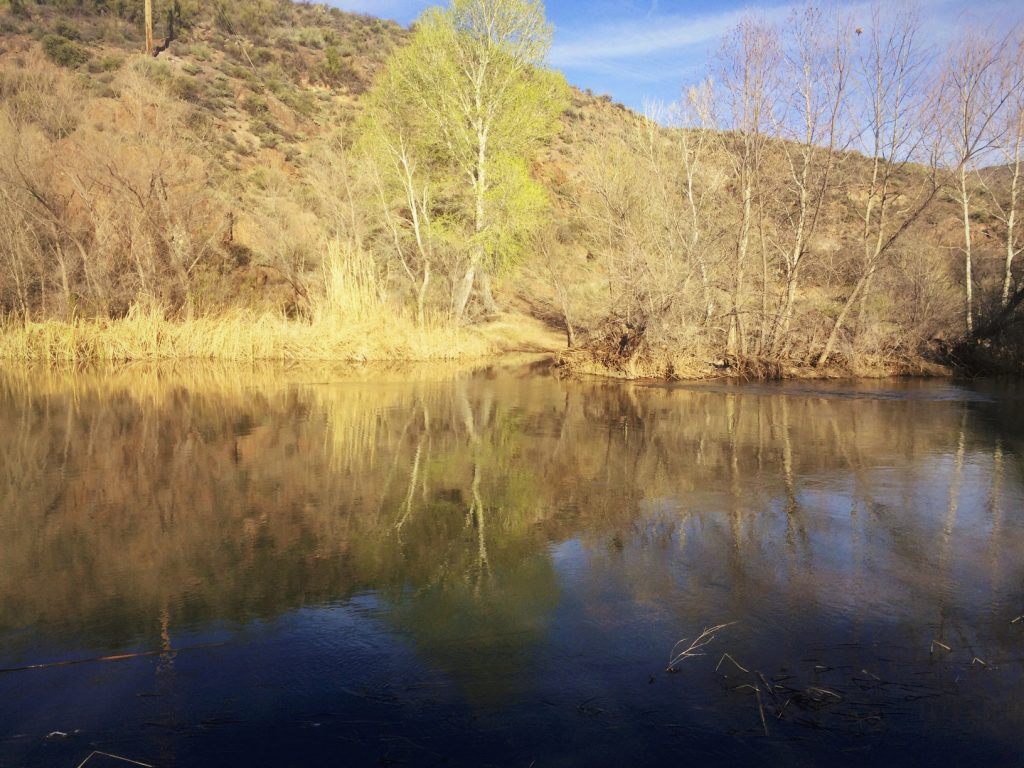 I was rewarded with a beer by some hunters after I crossed, then I found my way down to the hot springs where I encountered some “interesting” characters. They too were amazed at my journey, maybe I left some of them inspired. To them I am now known as “bike dude.” 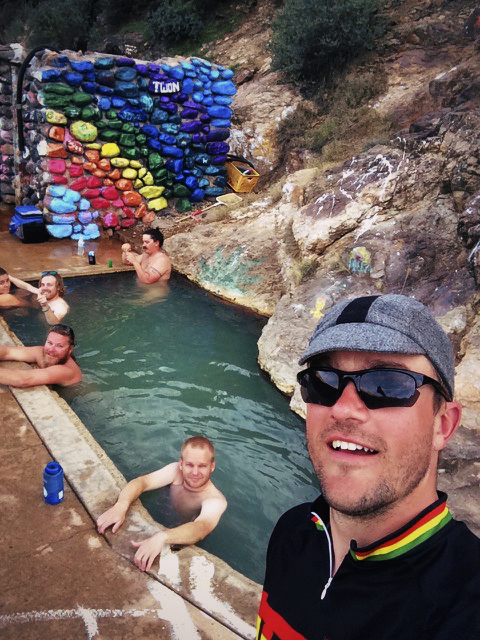 After a quick swim, I made camp and tried to eat and drink as much as I could. It was nice having a never ending water supply. I was dreading the climb out of camp the next morning, so I decided to try to get up as early as I could to beat the heat of the day.

The next morning, I drank my fill from the river before heading up Dougas Rd. The climb up from the Verde is relentless.

Up, up, and up some more. All morning was steep, the flat spot on the GPS was only a short break in climbing about 600′ per mile. 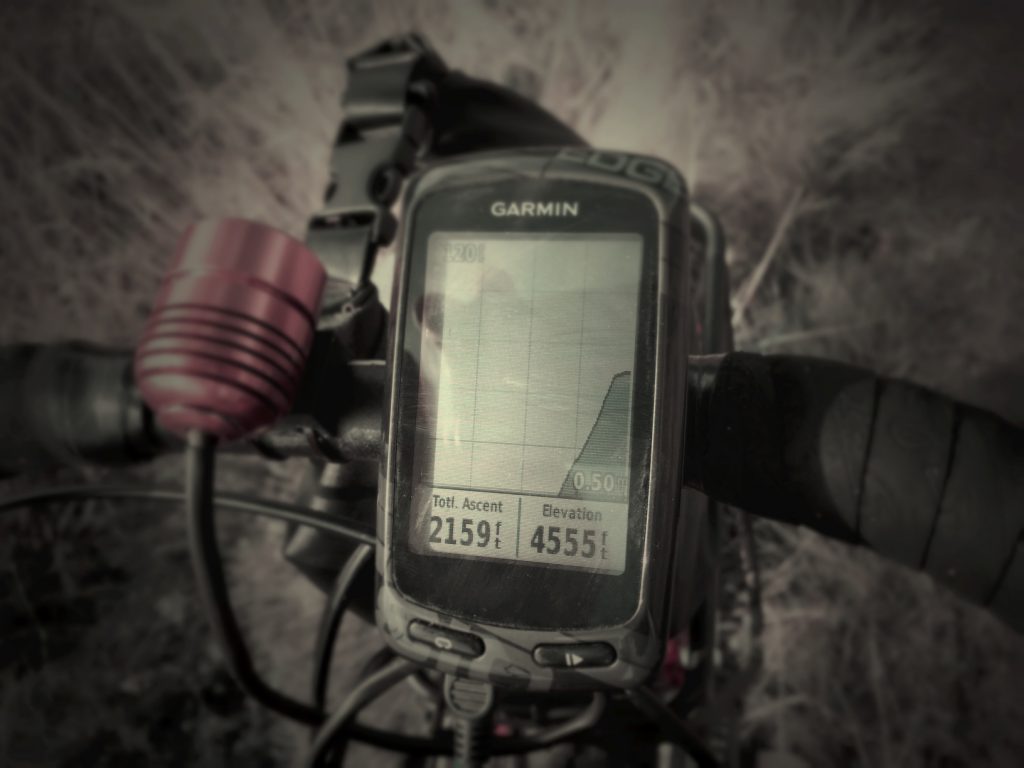 Still this much more to go. 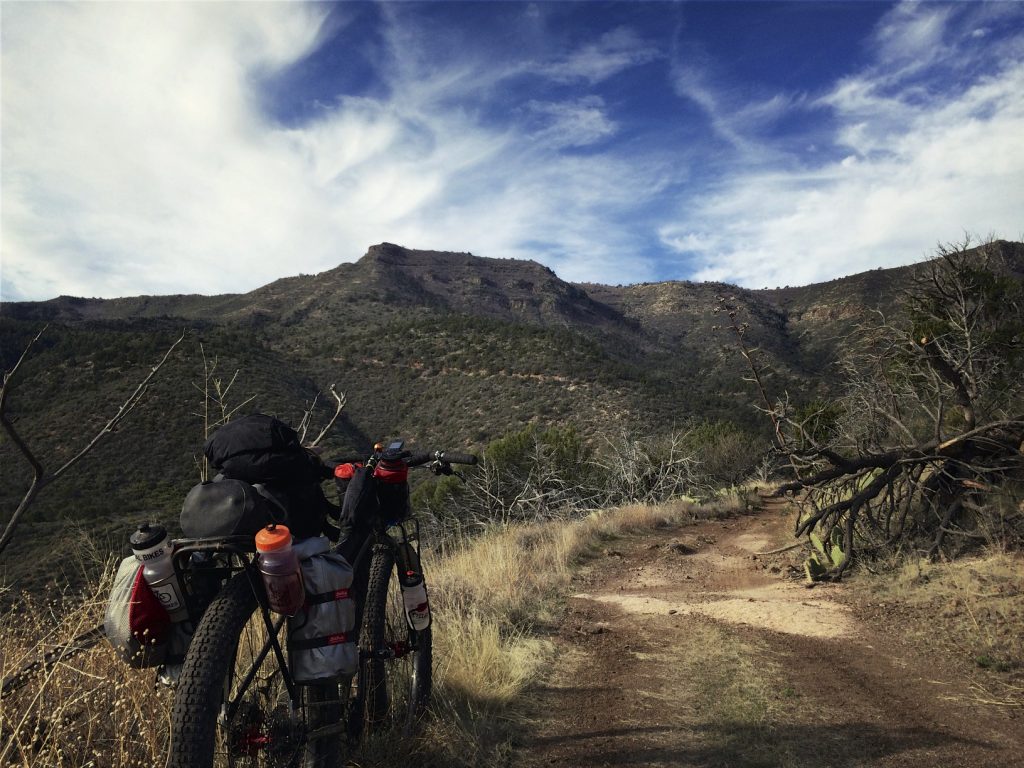 6 miles, and 3700′ of hike-a-bike later, I was rewarded with one of the most expansive landscapes of the trip.

A few moments later, I stumbled upon a little “trail magic” and I was set to make it to Mayer. 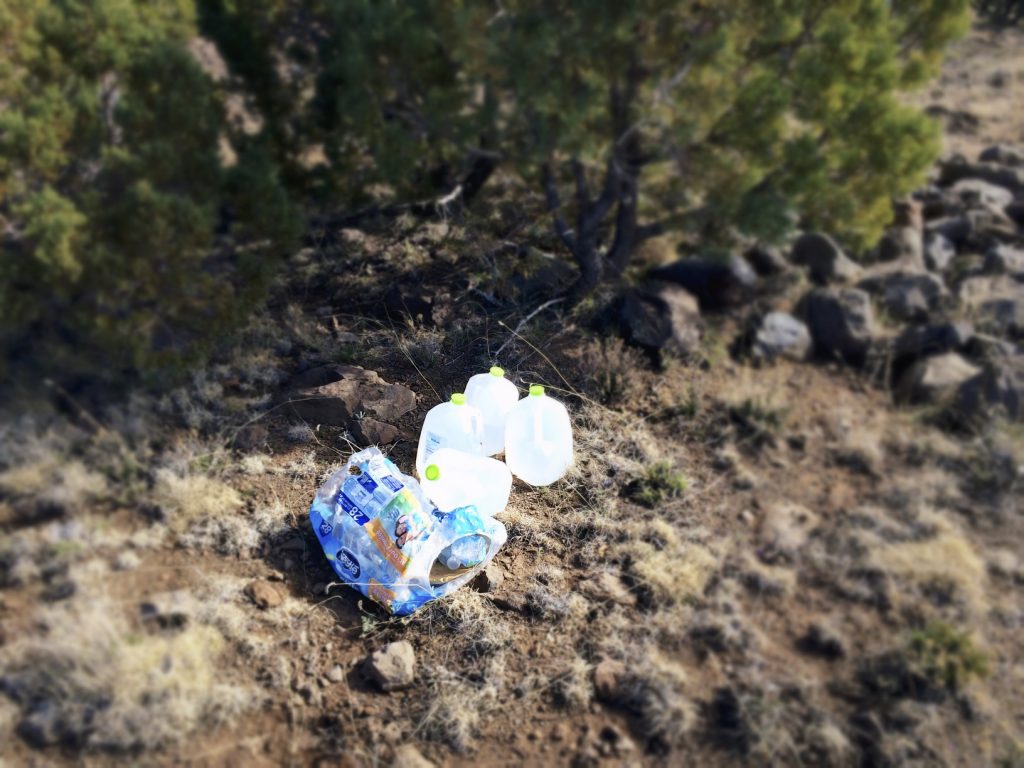 Finally, I was riding again, the road was rough, but at least I wasn’t walking anymore. After a couple miles of dodging baby head rocks, it was smooth sailing for miles on nice gravel. Again I was stopped by a couple in an SUV and questioned about my journey. They were all too excited to learn more as they were familiar with road touring, but had never considered doing it off road on a mountain bike.

Last windmill of the trip. 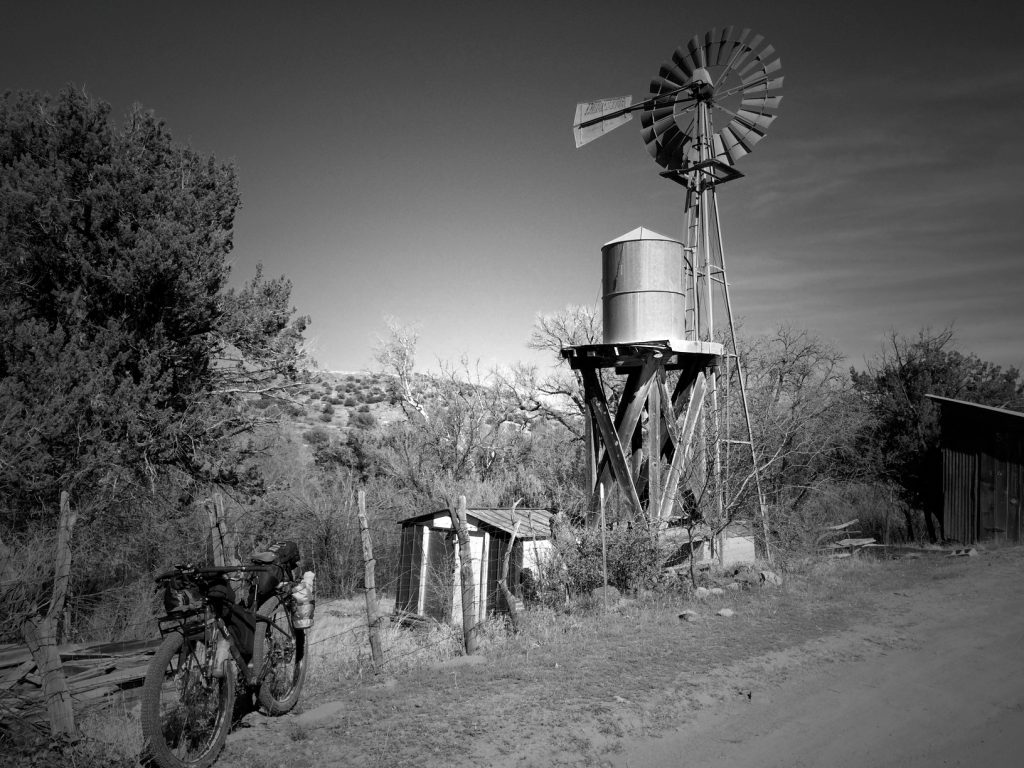 After passing through Dougas, I crossed over I-17, and was planning on hitting Old Sycamore Rd back to Mayer, refilling, then heading to Poland Junction and the back way to Prescott. I missed my turn, and stayed on Orme School Rd. all the way to Highway 169.

I had dinner at Leff-T’s Steakhouse in Dewey, and decided that I would head home to the comfort of my own bed, and save Poland Junction for the next time. I was changing in to my cold weather clothes behind the restaurant when Toby drove up and surprised me. He had just been talking about me and brought me up on the Spot website, only to find out I was right across the street.  A little farther down the road, my boss passed me by as well. 3 Days, 188 miles, and 17,000′ later, I was home. 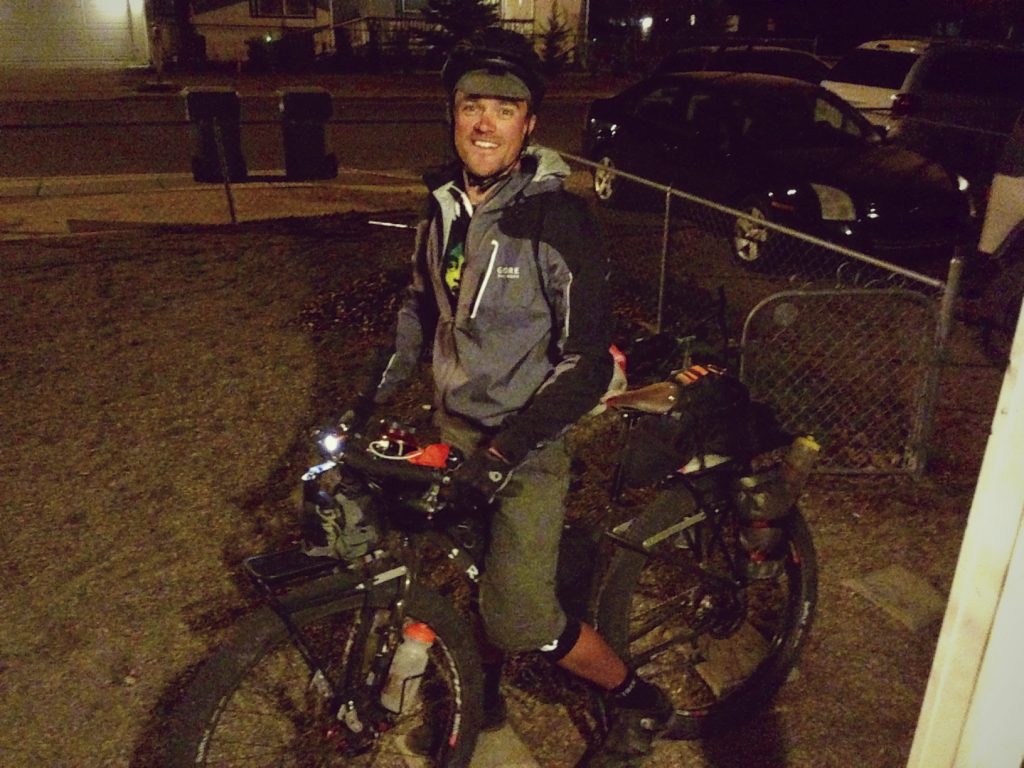