My Son Caiden turned 7 this summer. Since his return from traveling and spending time with my parents, all he has talked about is going on his first Bikepacking trip. This weekend was our first opportunity, and I wasn’t about to watch it slip away.

Caiden was excited to carry what he could. We loaded our tools and first aid kit in his framebag, his full change of clothes and jacket in his handlebar bag, his caving headlamp in the seat bag, and all of our food in his backpack. He was also carrying a liter of water in a bag on his stem.

My bike, on the other hand, was carrying almost a gallon of water,  as well as our cooking gear, tent, sleeping pads, pillows, sleeping bags, and my own extra clothing. All things considered, it was still a pretty compact load. We were all geared up and ready to head out to Flagstaff once we thought the rains had passed. We drove around 90 miles to get to our launch spot, 6 miles from our exit, the rain we tried so hard to escape was opening up right before our eyes. The top was off the Jeep, so we pulled over to throw on some rain gear. Surprisingly, we didn’t get wet at all as we drove to FR171 where we would stash the Jeep for the night. 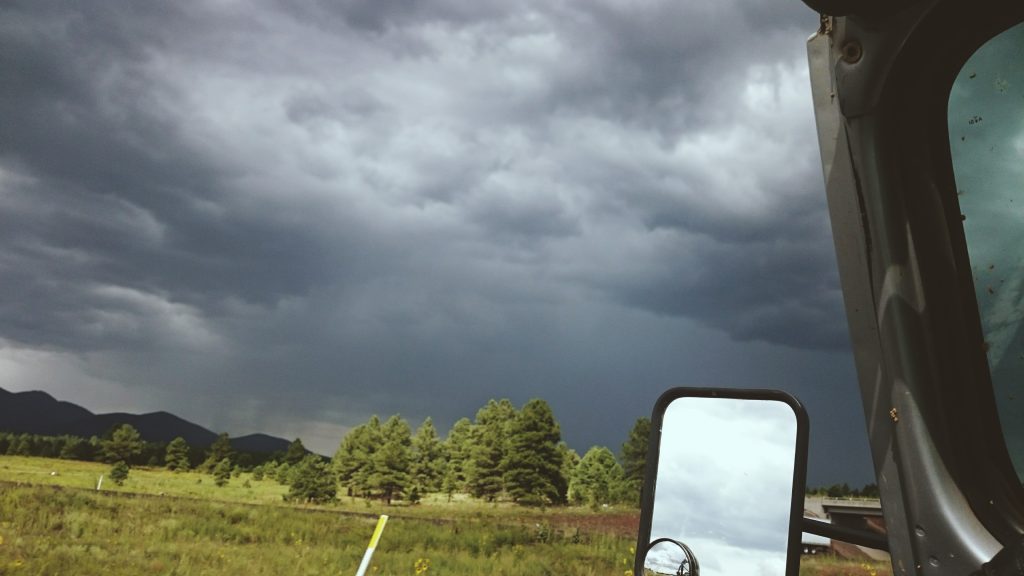 We parked about 6 miles from the cave entrance. The road was wet, but not muddy, perfect riding conditions with clouds overhead and cooler temps. 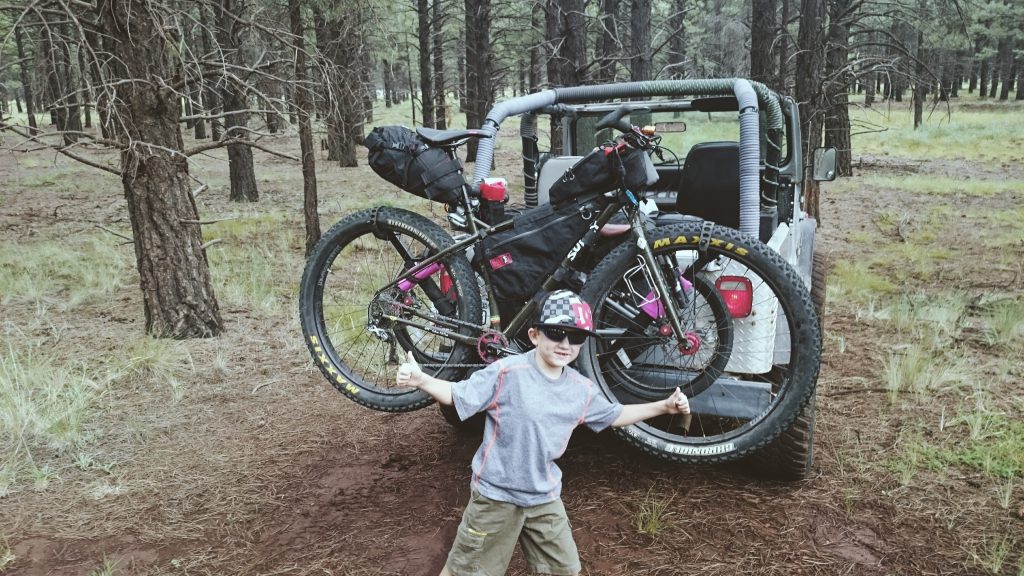 I put the gear back on our bikes while Caiden went to see what he could find.

A few loud cracks of thunder rolled overhead just before the sky opened up again. We thew the emergency top back on the Jeep and took cover for almost 40 minutes before it stopped. Caiden got into the beef jerky. 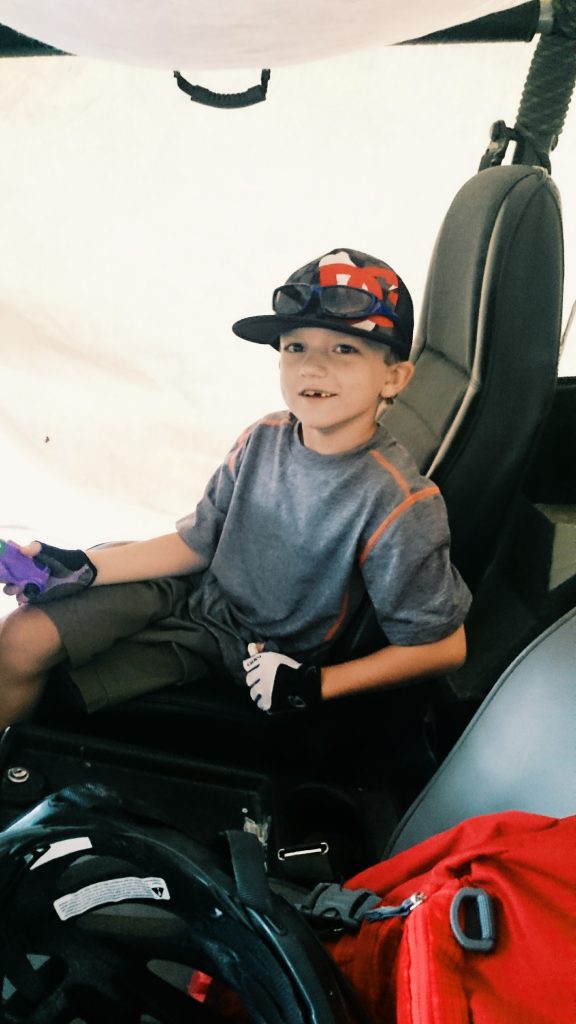 Finally, the pitter patter of rain slowed over our heads until we were ready to brave the outside again. There was plenty of water running under the Jeep. 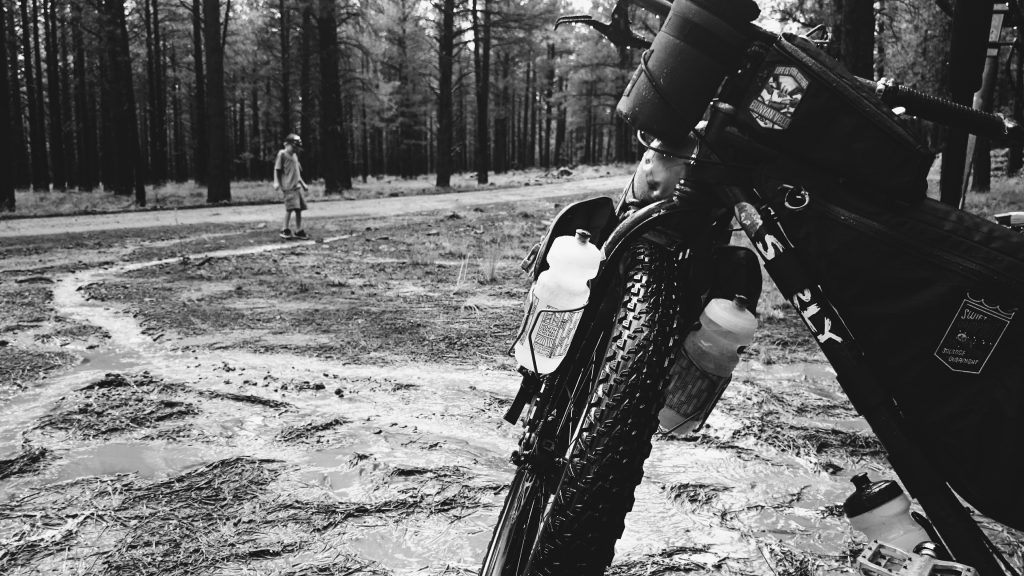 We dried off our bikes, and were ready to head off. 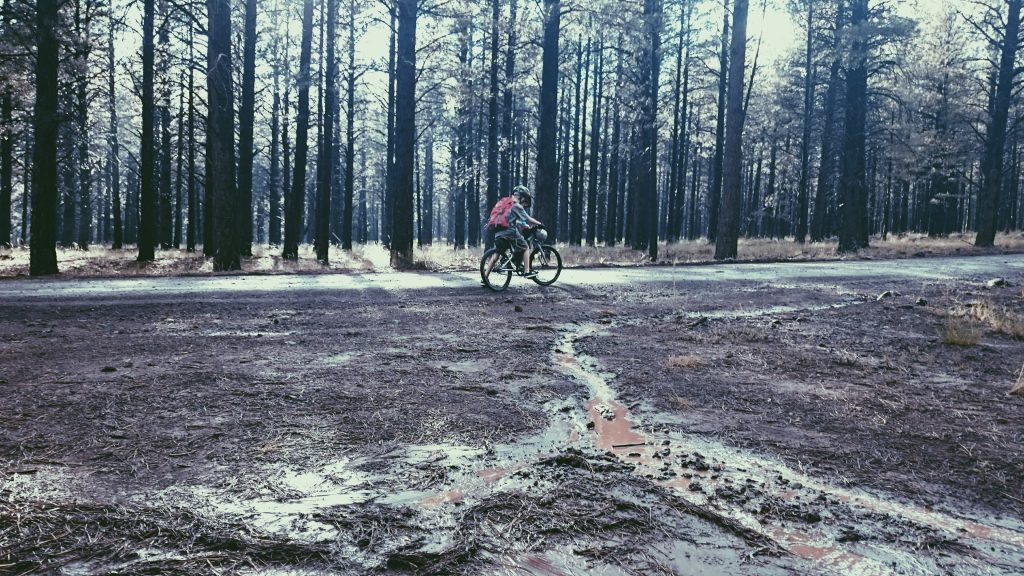 Out of nowhere, this kid will just slam on his brakes, and pick up the most random artifact. What’s This?!? Part of a leaf spring Caiden. 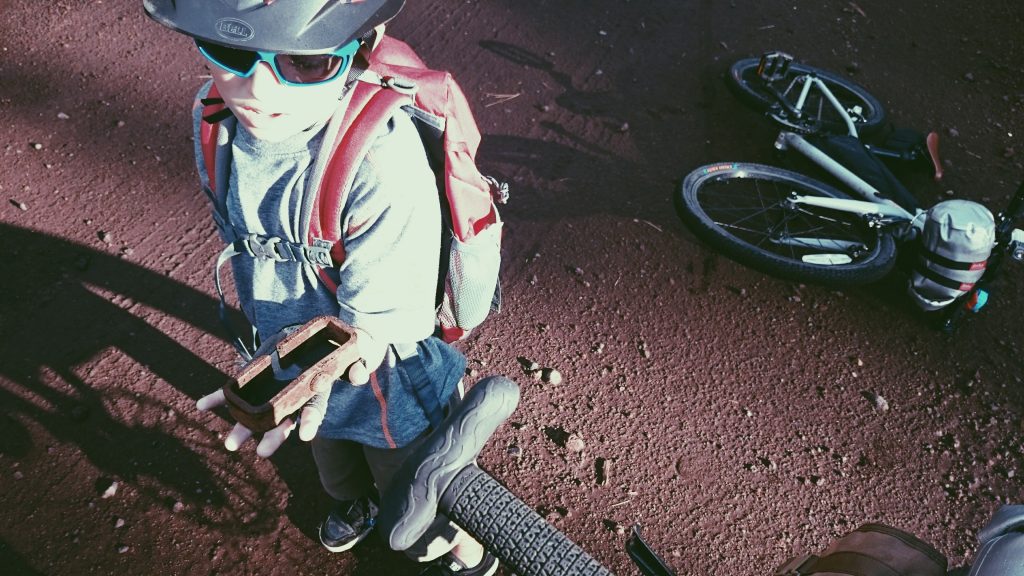 Time for a snack, 4 miles of climbing is rough work. Good thing I stashed these cheese coffee cakes. He is in love. 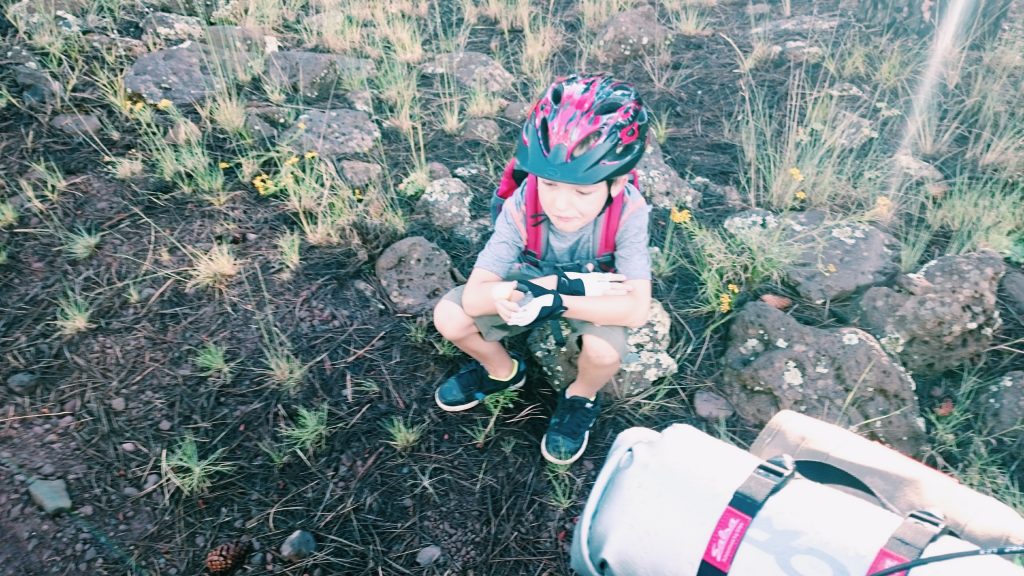 After a little coaxing along, we hit a flat spot and a nice big cow pasture followed by a cozy little pine area where the ground wasn’t too wet. 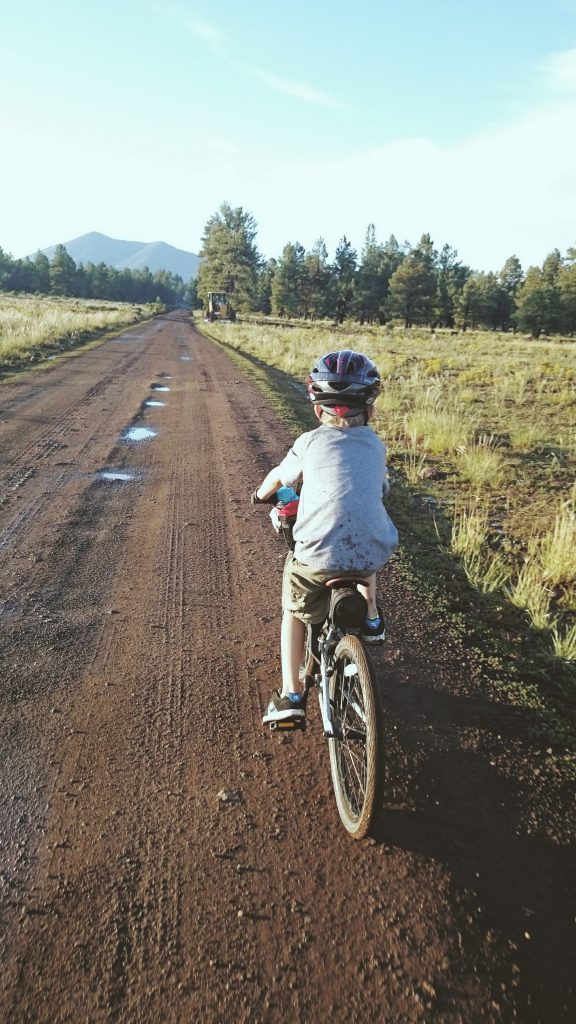 I have never worked so hard to start a fire in Arizona. It took an hour to get the wood hot enough for the moisture to boil out. All around us we could here Coyotes and Cattle going at it.  We had our Mac and Cheese for dinner, and Caiden was OUT for the night. 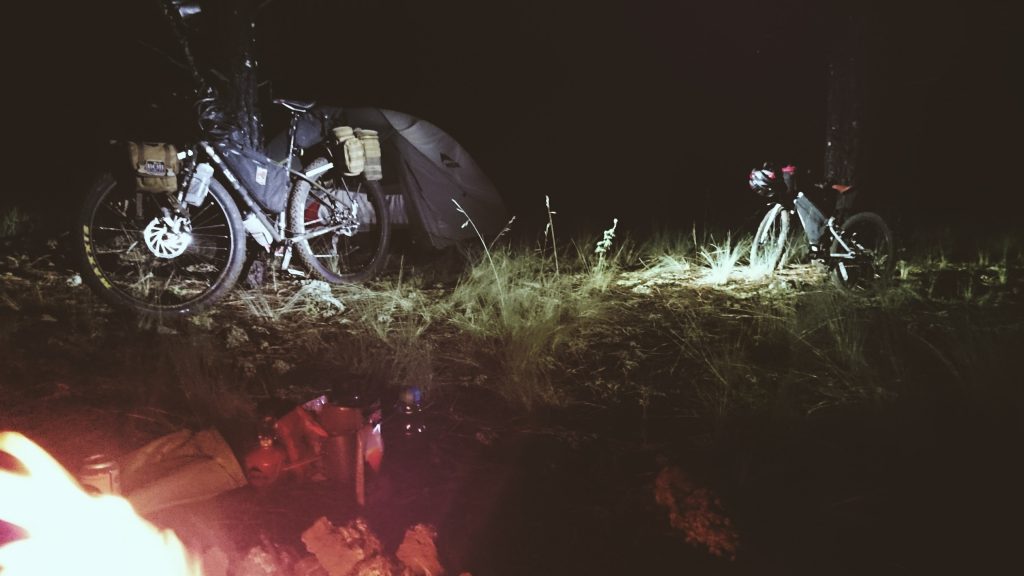 For breakfast, we had picked out scrambled eggs and a giant blueberry muffin. Neither lasted long. 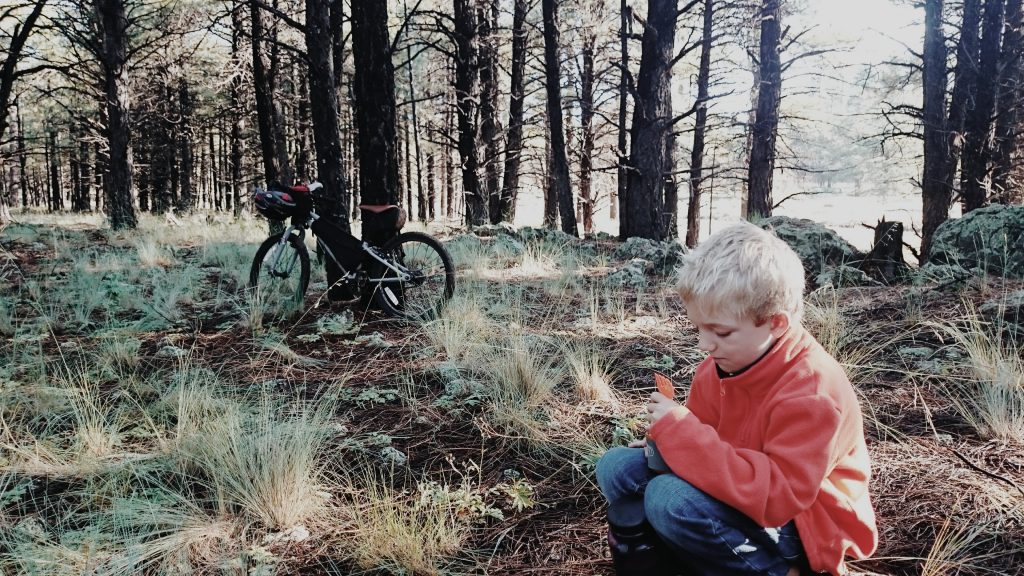 Once we had dried out camp, we loaded up the bikes and headed farther north up the road, towards the cave. 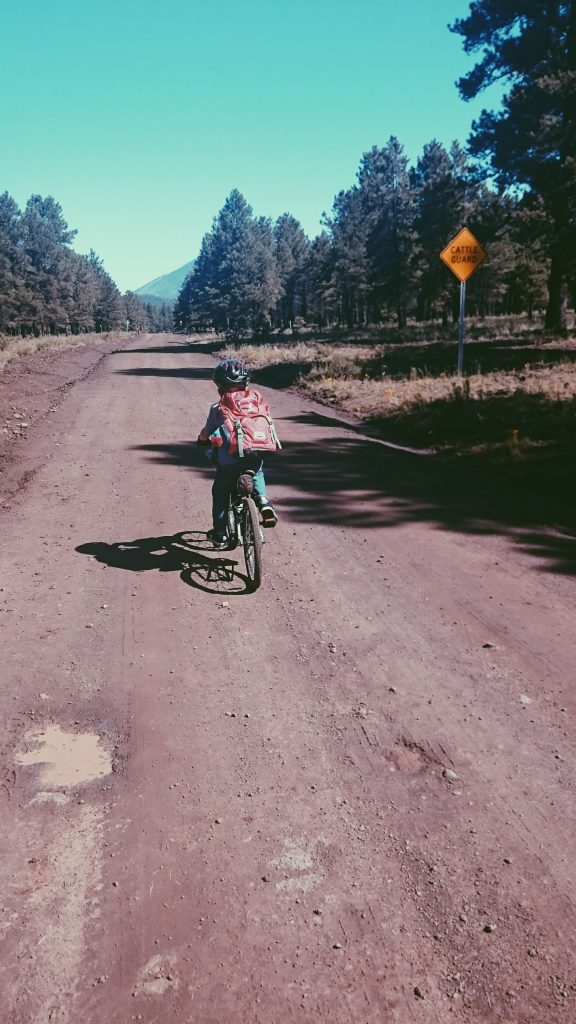 With plenty of morning energy, we made it there in no time at all. After putting on a few layers, we were ready to explore the, now chilly, Lava River Cave. 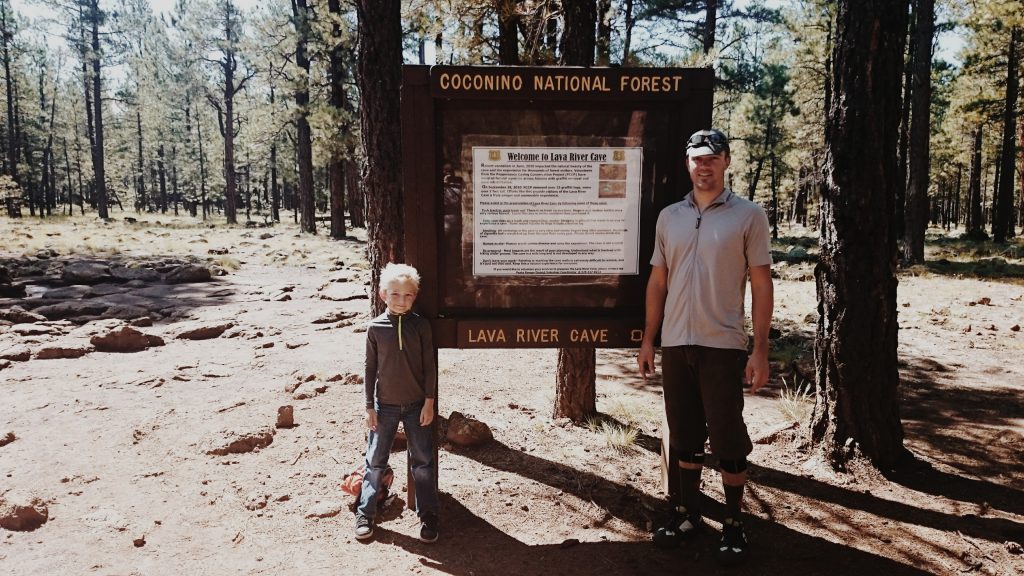 Caiden had the brightest head light of everyone we saw and was thanked a few times for lighting the way for others. 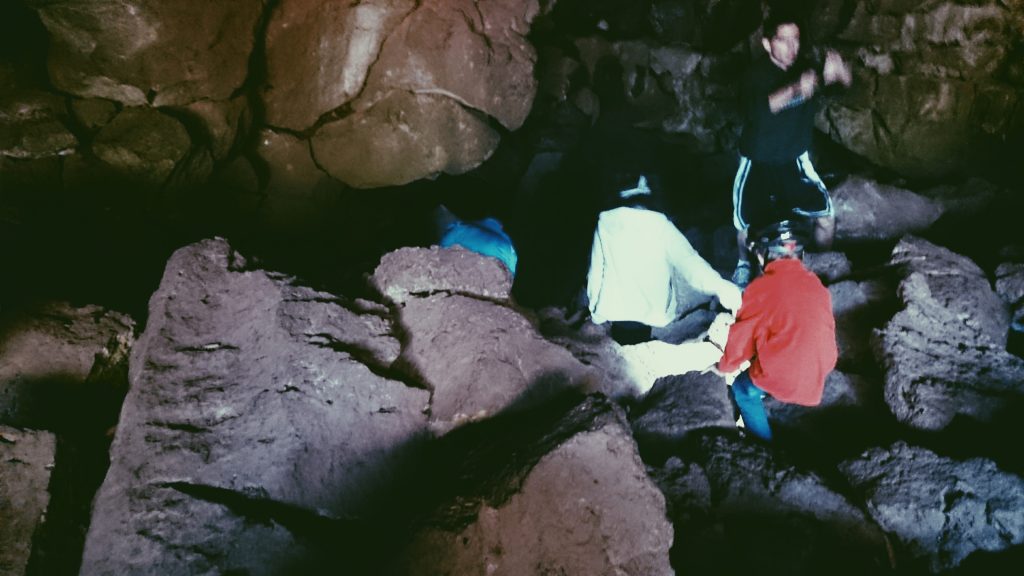 At times, the roof got so low, you had to crawl underneath. 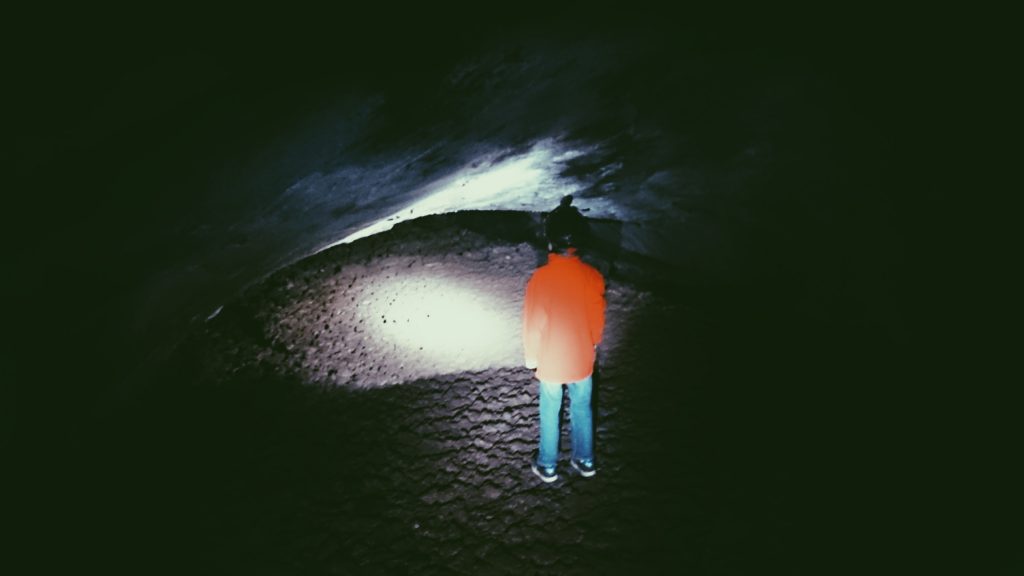 After another cheese coffee cake snack in the cool cave, we were ready to make the descent back to the Jeep. 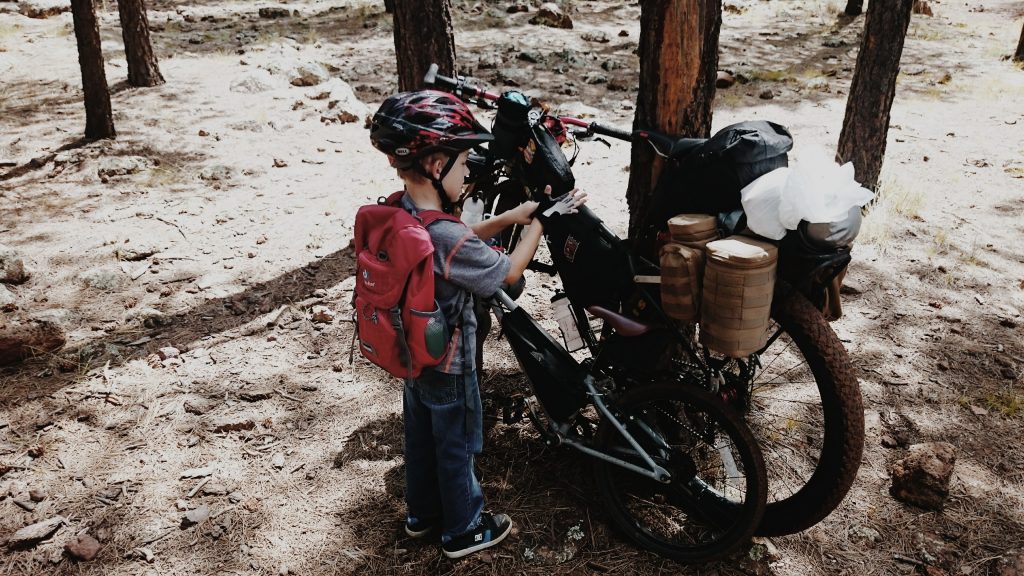 The Peaks we had been riding toward, were now behind us. 6 miles of downhill.

Processed with VSCOcam with m3 preset

This trip was the first opportunity Caiden had to ride over a cattle guard. After needing to take a second run on his first crossing, he was a pro by his fourth.

Cruising along after he stopped for a freeze dried Ice Cream Sandwich. 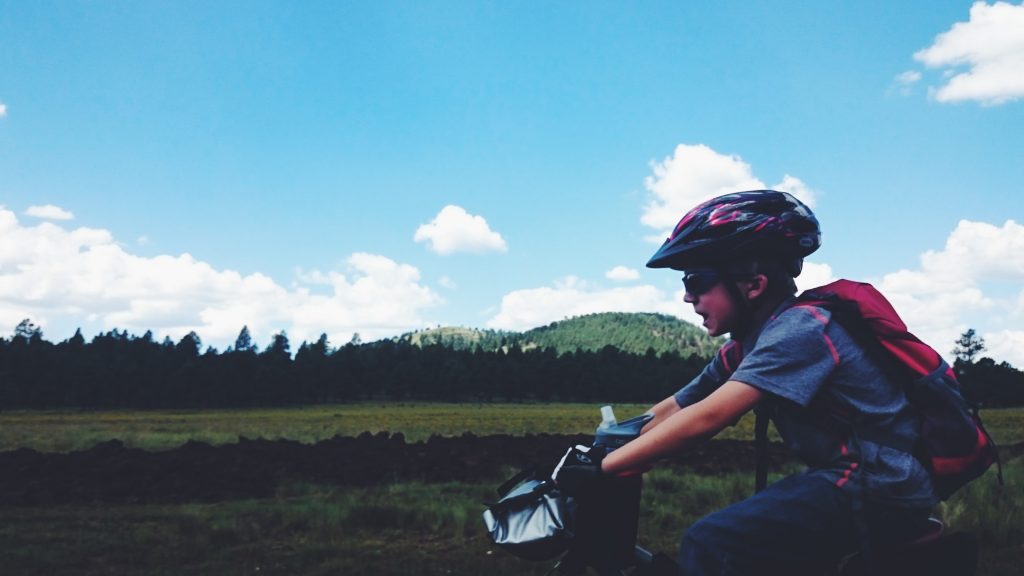 We made it back to the Jeep in one piece. What a great first bikepacking trip!